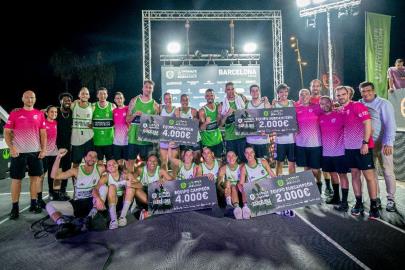 Final Master Barcelona 2022 explained that 3×3 basketball continues to grow exponentially. The level of teams, the best in the country, made a quantum leap at the Herbalife 3×3 Series circuit, which at this year’s edition showed once again that this type of basketball is here to stay. The event in Barcelona concluded the season, as 12 teams and eight women’s teams competed for the grand prizes awarded by the tournament.

On the track installed in the Moll de la Marina, in the heart of Barcelona’s Olympic port, the public was able to enjoy the best sports scene in the country. From Saturday’s first matches, with a very intense women’s group stage due to the importance of each match, to the three-point competitions, dunk fair and title duels in both categories, the emotion was unparalleled.

The men’s team gave us great moments, with the quarter-final matches coming to the last minute and with winning baskets of excellent quality, like the ones they achieved William Mullero Against 3×3 Madrid or triple Diego de Blas Which gave the victory to Betius 3×3. The semi-finals were enjoyed with great emotion, with Baskett Girona winning over Pete to Me O’Neill 3×3 and 3×3 Real Madrid winning 3×3 Petius. In the Grand Final, Bàsquet Girona triumphed, having starred in a perfect tournament counting all his matches with victories and with a list made up of Nacho Martin, Alex Lorca, Sergio de la Fuente and Javi Vega Circle closed elegantly.

For their part, the intractable Be Goat team Fisióptimus La Rioja dominated the women’s draw, who, after beating Azuqueca 3×3 in the semi-finals, got rid of 3×3 Madrid eliminated thanks to a superb defensive effort by the great candidate: basketball Girona. The final left an unforgettable shock, with crucial extra time thanks to a breakthrough Helena Uma That gave the title to his team. The group you formed Maria Sall, Helena Uma, Georgina Bahi and Paula Estepas He signed an amazing path to winning the final prize, beating the Madrid 3×3 team whose participation in the Masters was outstanding, and placing his team in the finals of both categories.

An award ceremony was held for the bridesmaids in the female category Manuel Perez, Project manager for the Herbalife 3×3 Madison series. For their part, the heroes received the award from my hand Gabriel AranzDirector of Sports Events for Barcelona City Council. In the male category, Elizabeth Aguilar The FFL’s director of competitions handed over to the runner-up team while Christina Delgado, Responsible for Herbalife Nutrition’s care, he did the same with Champions.

In short, a double day to commemorate the best basketball 3×3 portends that next season we will continue to experience the growth of a sports system that ensures entertainment and continues to gain followers.