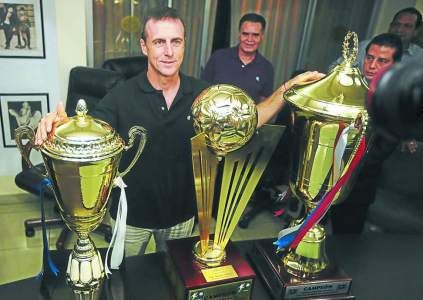 Three-time champion as a player and coach, he talked about it Danilo Javier Tosilo It refers to one of the greatest idols in the history of Olympia, Honduras’ largest football club.

Today in an interview with Deportes TVC; The Argentine revealed his reasons for leaving Honduras in 2013 when they were having a great moment since he won the championship three times as DT.

“In September 2012, my father visited me, discovered a small spot on his body and then discovered cancer, the doctor called me and told me that he only had a few months to live. Before the tournament ended in December, there were a series of situations. I had a very big emotional load, I was longing for the tournament to end and I came to Argentina, and I saw my father deteriorated so badly, ”Danilo Tosilo started.

He added, “I had to go back to Honduras, I came and played the first match in La Ceiba, then I came traveling all the way and my head exploded. I spoke with the board, and I told them that I am going back to my country and this is what it was like,” At the same time, my wife was pregnant, they were twins, two cases arose, I came back immediately and I was with my father until July 12, when he passed away. “

The Argentine said that it was because of his family that he decided not to continue in Honduras.

“They were emotional situations that affected me so much, that I decided it was better to be with my family. A coaching career requires us to think, but there were many situations that went through my mind. It was the right decision, and fortunately the team was the champion. “

Danilo Javier Tosilo has denied the controversy that surrounded him at the time since he was accused of maintaining an affair with the president’s wife.

“They said different versions about my leaving, there was a journalist who wrote a novel and people stay with that, I can’t do anything. They said he had ties to the president’s wife, and that he had accounts. In the end, no complaints were filed. “

Pedro Trueglio and the Desire to Return

On the other hand, the former Argentine player and coach now praised Pedro Trujlio for his title three times.

“I called Pedro Trueglio when it was announced as Olympia coach to explain the atmosphere a bit and we also collaborated with Matias Garrido appointedAnalyze.

He added, “To be a champion with Olympia is very difficult. Imagine winning three times in a row, I heard many say that he was heading alone, but it is very difficult, he is always preparing to be a champion but it has not been achieved. For more than 50 years, he has achieved three.” Technicians only triple championship, which indicates that it is not easy to do this. “

Finally, Tosilo has expressed his desire to return to football in Honduras in the very near future.

“In time, I’ll be back directly to Honduras. We’ve had contact with Osman Madrid. At that time I recommended Hector Vargas and Mario Zanabria. “

And it ended:They called me but I’ve always been raising the family situation, we’re putting it off to twins. Now they are older and we’ll see later ‘–

“There is insecurity everywhere. I always felt safe in Honduras, and only once did I feel safe when we were leaving a mall and a residential complex before we got to Jose Mauricio Pacini’s apartment, where his cell phone was stolen.”