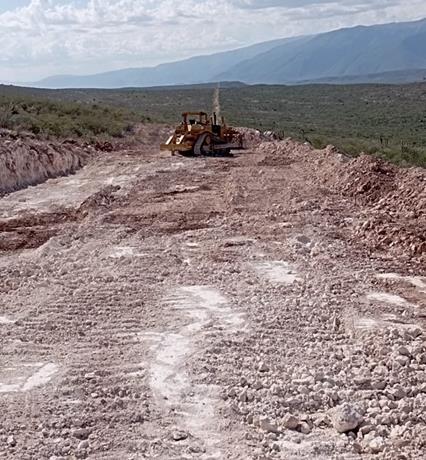 The Defense Ministry said on Sunday that work on the border fence being built by the Dominican government on the border with Haiti is progressing on the four identified fronts, located in the provinces of Independencia, Pedernales, Elias Peña and Djabon.

And the authorities announced in a statement that In the province of Dagabon, work is carried out from pyramid 17 to 21And that five kilometers of roads needed to transport building materials were prepared, while 800 meters of roads were cleaned, filled and compacted on the eighteenth.

This means that the section referred to Ready to start fence base and the subsequent placement of the metal mesh.

They also indicated that the administrative process that followed the awarding of work and the implementation of engineering tasks, such as topographical surveys and planning and technical studies, had been completed.

They also indicated that the installation of a curing plant and testing with aggregates for concrete production in Dagabon, is in its final stage.

In Jimani, Province of Independencia, The same process was carried out on 830 meters of the roadStarting from the pyramid No. 248 towards the northwest. And in Pedernales and Elias Peña, the installation of two camps has already begun, which will serve as a support for the construction of the fence in those districts.

Progress has also been made in assisting people claiming property rights along the path where the fence is being built, a task in which a team of appraisers and surveyors from the Ministry of Public Works and Communications (MOPC) are collaborating.

A preliminary report prepared with information from the real estate jurisdiction shows that in the 21.5 linear kilometers corresponding to Sections 1 and 2 (Montecristi d’Agabon), there is a territorial extension of 13643,731 square metres, in twenty-six registered plots, seven in the name of the state, of approximately 11.8 million metres. And nineteen private, 1.7 million meters.

The first phase of this project involves the construction of 54 kilometers of physical fencing19 watchtowers, 10 entrance gates, and 54 kilometers of lanes to patrol both sides of the fence; which will be divided into 6 sections distributed as follows: Section 1 and 2 in Dagapon and Montecristi with a length of 25.3 km; Section 3 in Elias Peña, 3.5 kilometers long; Sections 4 and 5 in Jimani are 17.2 kilometers long and Section 6 in Pedernales is 7.8 kilometers long.