EGYPT – A 2,500-year-old warship discovered in a submerged city 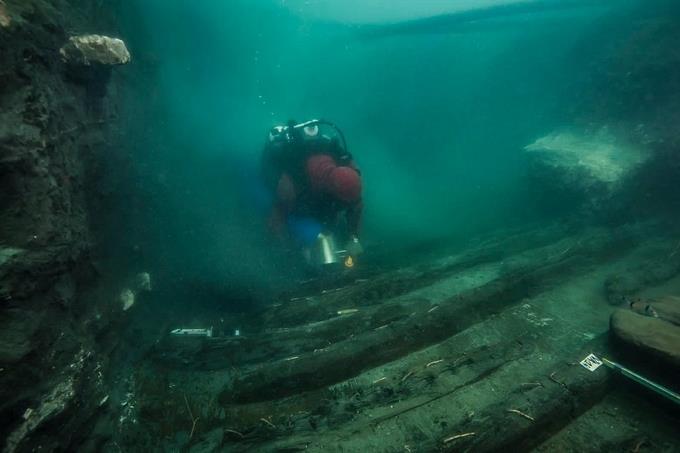 Remains of a Ptolemaic-era warship and burial grounds from the early 4th century BC have been discovered in the submerged city of Heraklion near Alexandria, Egypt.

And quoting Egypt Today, the Secretary-General of the Supreme Council of Antiquities, Mostafa Waziri, said that the ship was on its way to dock in the channel that was flowing along the upper side of the Temple of Amun, but it sank due to the collapse of the temple. Huge blocks fell on it during the second century BC as a result of a devastating earthquake. The fall of those stone blocks kept the ship in the deep channel, where the remains of temples were now scattered.

The head of the Egyptian Antiquities Sector, Ayman Ashmawy, explained that the remains of that ship were discovered under nearly five meters of solid mud representing the seabed mixed with the remains of the temple, using underwater excavations as devices to determine the features of the subsoil.

Frank Goddio, head of the expedition at the European Institute of Underwater Archeology (IEASM), confirmed that the discovery of fast ships dating from that time is very rare, and that Greek ships of this type were completely unknown until the discovery of the Punic ship. Marsala (235 BC), which is the only example we have.

He added that preliminary studies indicate that the ship was long, exceeding 25 meters in length. The helmet is made in the classic style that is based on the thrust-and-grip technology, but it has the characteristics of the ancient Egyptian style, making it a mixed type of construction.

The boat has a flat bottom and a flat keel, which is a very useful model for navigation on the Nile and within the delta.

Heraklion was for centuries Egypt’s largest port on the Mediterranean, before Alexander the Great founded Alexandria in 331 BC. Several earthquakes followed by tidal waves have left the terrain fragile and a stretch of about 110 square kilometers of the Nile delta collapsed, with the cities of Heraklion and Canopus collapsing under the sea.