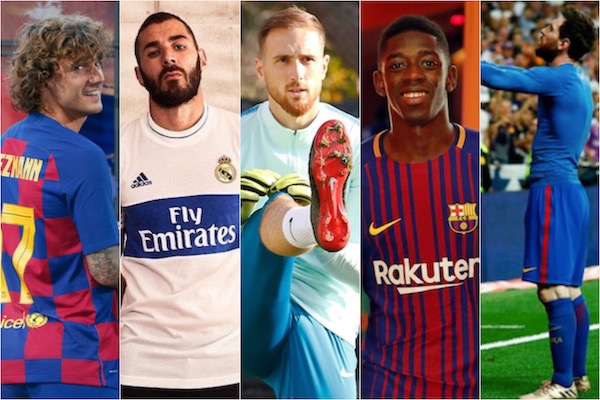 There’s a general misconception out here that the only best paying league in the world is the Premier League, and the way players troop to the league to some extent qualifies this assumption. Though there are some good contracts players get in England, it is far from the truth that it is the only high paying league.

One of the best paying leagues in Europe is the Spanish La Liga and it will pass as a big surprise the amounts the top three teams, Real Madrid, Barcelona and Atletico Madrid offer.

Here are some of the top earning players in the league:

Gareth Bale: The Welshman has gone through top and low moments at Real Madrid since his move from Tottenham Hotspur. He played a key role in Real winning their 10th Champions League title before a fallout with former manager Zinedine Zidane, which saw him go out on loan. He remains the biggest earner in the league, pocketing a weekly wage of £600,000. Because of his posts on social media and his performances at Wales, which are presumed better than at Real Madrid, he is not a fan favorite.

Eden Hazard: Another Real Madrid player, Eden Hazard ranks as the second best paid player, raking in a weekly wage of £416,000. Hazard moved to Real from Chelsea but his time at the Spanish giants has been blighted by injury and the team is even considering releasing him.

Frenkie de Jong: Barcelona midfielder Frenkie de Jong is the third highest earner and the top at the Catalan club. He was signed from Ajax after their impressive 2019 campaign in the Champions League and has remained a key member of the team. He earns £354,000 a week, and is currently one of the senior players holding the team together in the wake of the chaos the club has been going through.

See also  Arturo Vidal wants to play in America, but "there has to be (interest) from both parties"

Antoine Griezmann: The Frenchman is back at Atletico Madrid after an unsuccessful sojourn at Barcelona, and he still commands high wages. He earns a weekly pay of £345,000, making him the top earner at the club. So far, whether or not he has done enough to justify the pay remains debatable but he has scored a few key goals. He won’t be available for Atletico against Liverpool after his sending off in the first leg of their Champions League clash, nonetheless, football predictions on Wincomparator tip Liverpool to win the game.

Toni Kroos: Back to Real Madrid again; German international Toni Kroos is in the list of high earners. Signed as part of a swap deal that involved Xabi Alonso going to Bayern Munich, Kroos has worked his way up the Madrid ladder and commands a weekly wage of £329,000.

Luka Modric: Another top earner in La Liga is Croatian playmaker Luka Modric. He didn’t have the best of starts at Real Madrid after arriving from Tottenham Hotspur in 2012, but he has gone on to prove his worth both at the team and at the world stage. He pockets £294,000 a week.

Karim Benzema: One of the longest serving players at Real Madrid is Karim Benzema. The Frenchman has been in sublime form over the years and even after Cristiano Ronaldo left, he stayed on as the talisman. He earns the same as Modric; £294,000 a week.