More than 200,000 people demonstrated in France against the health passport 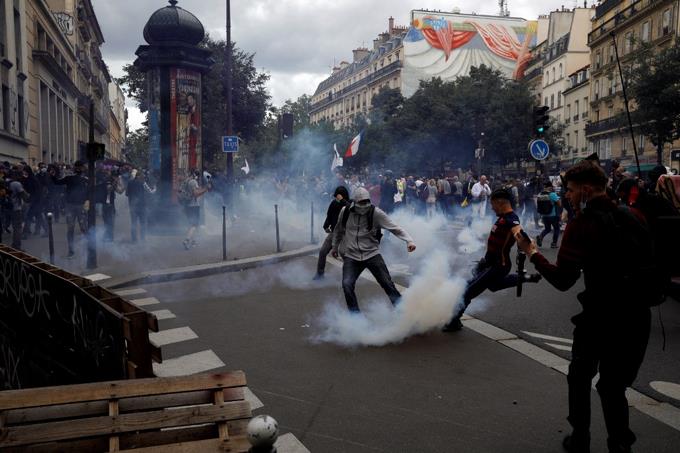 On Saturday, more than 200,000 people demonstrated in more than a hundred French towns against the health passport, the third consecutive Saturday of protests in France against the measure.

French President Emmanuel Macron announced on July 12 the use of the health passport to access many cultural and social activities, a measure that was implemented between the end of July and the beginning of August.

About 14,240 people demonstrated in Paris, where several protests were called and clashes broke out between protesters and security forces.

Prior to one of these demonstrations, Jerome Rodriguez, a well-known figure in the “yellow jackets” rebellion, criticized “members of the government and the press who are selling you the efficacy of a vaccine, without there being any evidence of it . . .”

More than 3,000 police have been deployed to the French capital, where incidents last week occurred on the posh Champs-Elysées, whose entrances were blocked on Saturday.

This weekend, demonstrations were called in about 150 French towns to protest the health passport, a measure supported by the majority of French, according to opinion polls.

“I am a Macron Jew”, “vaccinate me against fascism and capitalism” or “False media! We want the truth”, can be read on the protest banners in Rennes (Brittany, northwest), where about 2,900 people are present in the early afternoon.

“The president, deputies, sheikhs, scholars and journalists, all of them cowards” denounced one of the banners in one of these demonstrations in which calls for “freedom and freedom” were repeated.

Last Sunday, French deputies and senators approved definitively the law that extends the use of the health passport, which requires the presentation of a certificate of two-dose vaccination or a recent negative test.

This document is required from July 21 to access cultural and entertainment venues, and from August 9 it will be mandatory to go to a bar or restaurant and travel on long-distance planes and trains.

France, which has surpassed 50% of the vaccinated population this week, is facing an increase in the circulation of COVID-19, with more than 24,300 cases recorded on Friday.