OATH-Lionel Law: “Inflation is out of control” 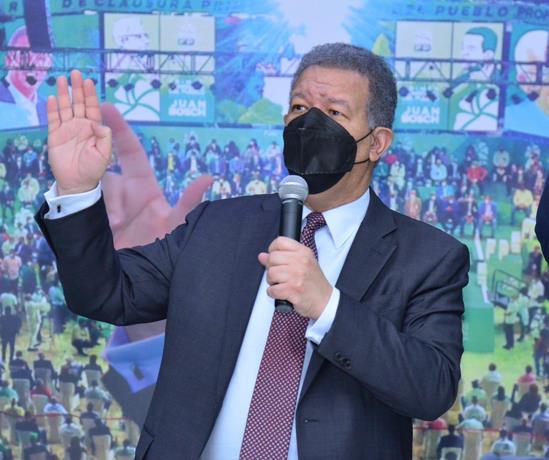 Faced with the disproportionate rise in basic necessities, the former president expressed concern, noting that the situation was spiraling out of control.

Inflation is spiraling out of control, last year it reached 10.48%, the highest number in more than a decade. Foods and non-alcoholic beverages saw the largest increase, growing by 13.14%, including fresh chicken, by more than 22%, pork by 23%, and cornmeal by 17%, as well as sausages and bread, among other things from first necessity.”

These statements were presented to the press by the head of the FP at the head of the swearing-in ceremony for Sanchez Ramirez County leaders, which was held at the party headquarters located on Benito Moncion Street.

In his speech, the former president compared inflation levels in this country with other countries in the region, which are much lower.

He acknowledged the external factors influencing this to happen, but said there are also many other internal factors that the authorities must manage.

He expressed the concern of the political leadership of the organization he heads, that not only food products were the subject of increases, but also products and services related to construction and medicine.

“We are very concerned about the increases that are seen in medicines, primarily those that are necessary to ensure the health of the poorest Dominicans,” Leonel Fernandez said following this statement that the government should expand Promesecal programs, so that medicines can reach the most disadvantaged hands.

At the Benito building, Fernández greeted the leaders of the “Old Party” with joy, along with the organization’s political coordinator, Radamis Jiménez, and other members of the Political and Central Directorates.

Among the group being sworn in are councilor Antonio Abreu (René) and Johan Mejia, director of elections and head of the old party youth of the Cotoi municipality, respectively.

Council members, who were also CI chairs, were accompanied by other chairs of these bodies, such as Angel Custodio, Heriberto Brito, and José Lizardo. In addition, 12 chairpersons of the base committees, as well as other prominent union leaders from the same municipality, took the oath of popular power.