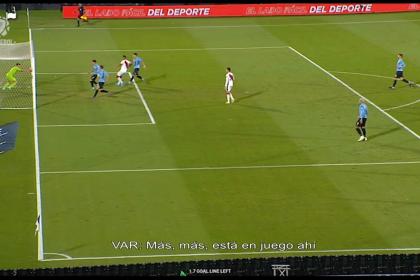 The Peruvian Football Association reported, on Sunday, that it had denounced the Brazilian referee Anderson Daronco to FIFA for his performance in his team’s match against Uruguay, in the South American qualifiers for Qatar 2022, in which he did not concede a net. A goal would have meant a draw for Blanqueroga.

“The federation informed that a strong complaint was lodged last Friday to FIFA regarding the actions of referee Anderson Daronko due to public facts,” the federation published in a brief statement.

He explained that he is awaiting a “quick response from FIFA, according to a regular behavior in its procedures,” and confirmed that the Peruvian team is continuing its preparations for the decisive match against Paraguay next Tuesday. He also thanked the “fantastic” support provided by the Peruvian fans in Montevideo last Thursday, and called on them to remain united with the conviction of reaching the “wonderful goal in this qualifier”.

The match against Uruguay, which ended with Celeste winning 1–0, was marked by Daronco’s decision not to concede a goal for Peru that would have equaled.

The play happened in the latter part of the match, when a display from Miguel Trauco to defend was poisoned and saved by Uruguay goalkeeper Sergio Rochet, when he was supposed to have crossed the goal line.

The word “robbery” was chosen by fans on social networks, the media and even by the head of state, Pedro Castillo, to refer to Daronco’s performance. With this victory, Uruguay got its share of the 2022 World Cup one date before the end of the South American qualifiers, while Blanqueroga occupies fifth place and has its last option to qualify next Tuesday in Lima, where it will host Paraguay.

A win is necessary for Peru to maintain a fifth place that allows access to the play-off against an Asian country. The Peruvian team announced, on Friday, that the Peruvian winger Andre Carrillo suffered a sprain in the match against Uruguay and will miss the last match against Paraguay.

Peru will also not count in the crucial match with Jefferson Farfan and captain Paulo Guerrero, who have yet to complete the process of recovering from their protracted injuries since last year.