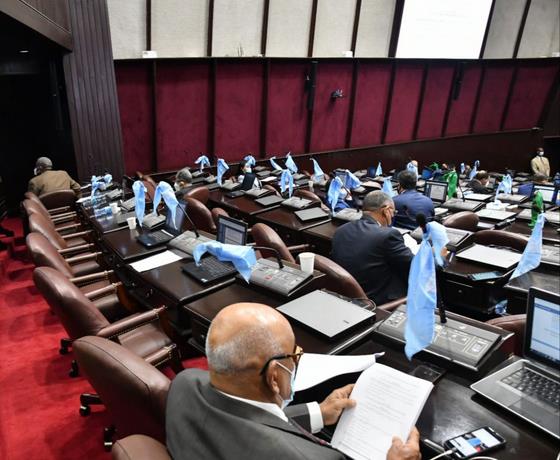 Between the blue and green flags, the plenary session of the House of Representatives began yesterday, reviewing the Dominican Republic’s draft penal code, with reading the report of the special committee that studied it for several months.

As soon as the doors of the House of Representatives opened, their representatives attached slogans and handkerchiefs to their seats in the colors that define their ideology in favor of life or interruption of pregnancy under the three reasons.

This new decoration on the seats in parliament is due to the current debate in society about whether or not abortion should be included for three reasons in the new penal code.

Just minutes before the session began, the chair of the House Justice Committee, Alexis Jimenez, confirmed that the three reasons were not included in the final report.

Report a violation
Because of this decision, the deputies of this committee, Jose Horacio Rodriguez and Santiago Villorio Lizzardo, filed an opposing report, requesting that the three reasons be entered in the draft penal code.

The Speaker of the House of Representatives, Alfredo Pacheco, ordered that the report of the draft penal code, which contains 412 articles, be read in parts in various working sessions, and at the end the report of the defector will be read.

The first 76 articles were read yesterday, among them the accumulation of judgments, which is when “the persecuted person is found guilty, in several separate processes, the sentences issued will be cumulatively enforced.”

Reading will continue in the following sessions, once the opposing report is read, discussions will continue, ending with votes on both reports.

Then, they will proceed to vote on the bill, which must be approved in two readings and then go to the Senate, which will first examine the legislative initiative and must go through a process similar to that of the House of Representatives.

The three reasons
As Congressman Jimenez announced, the three grounds have been removed from the legislative segment and sent to a special committee to study.

However, Article 112 provides for a defense against a specific case: “Interruption of pregnancy exercised by medical personnel specializing in health institutions, public or private, shall not be punished if, in advance, it is to save the life of the mother and the fetus. Danger, all available scientific and technical means are exhausted. To the fullest extent possible. In these circumstances, the actions are regarded as pertaining to the justifiable truth of the case of necessity.

Keys
Easter holiday week.
Pacheco announced that the House of Representatives will be shutting down next week in Holy Week, so business will resume from Monday, April 5.

Surveillance Act.
Faced with the possibility that the law would be approved in this way by the majority of “pro-life” lawmakers, Jose Horacio Rodriguez and Juan Dionisio Rodriguez have set their hopes that President Luis Abenader will watch the initiative.