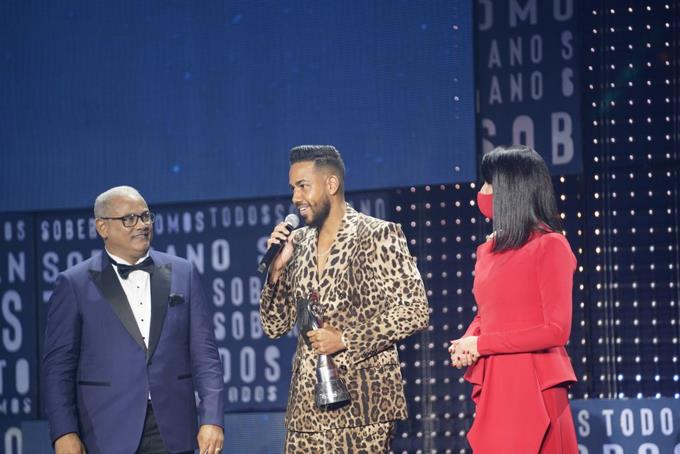 “The King of Bachata” Romeo Santos was the big surprise on Sovereign Awards night by winning the corresponding 2020 Grand Sovereign, while legendary singer Nene Cavaro featured the 2019 statuette.

He also emphasized that “the most important thing for any human being is to preserve his originality and remember that if this leads to success, do not change,” because in life there are ups and downs like what happened at his 25-year-old. Profession.

More than two decades after he began contributing to the global “boom” of Spanish music with the song “Obsesión”, Romeo Santos can shine ever more mace “rey de la bachata” as the author of several international albums of extraordinary sales, demonstrating that her It was more than just a fashion.

On the other hand, Cavaro culminates in an artistic career that has given him fame and popularity, making him the king of festivals and the voice par excellence for the most famous song in the Dominican Republic: “Por Amor”, composed by Rafael Solano.

Cavaro thanked his family and the Dominican people who had pampered him for so many years.

“Life gave me two different parallel jobs, but when I was young I never thought I would become a singer,” Erasmo Alfonso Cavaro Duran (his real name) said in a conversation with LIST agoN DIARIO some time ago.

The song “In Ruins” led to his fortune and has since become popular in all cities, with performances in cinemas, clubs and other places. “I used to go across the country and sing.”

There, in 1966, another painting appeared on the radio: “Cada vez más”, also by Solano.

In 1968, Amokaba held its first song festival, one which Cavaro won with a clean-throated put full force into “Por Amor,” Solano’s masterpiece, which both led to Dominican musical future generations.

“That song led me to be a world-class artist, but I never wanted to be a full-time artist,” he insisted last Friday during a meeting with this editor.

In the years that followed, he won the gold medal at the world’s premier Latin Song Festival, Mexico in 1969, and third place at the Oti Festival in Belo Horizonte (Brazil) in 1973.