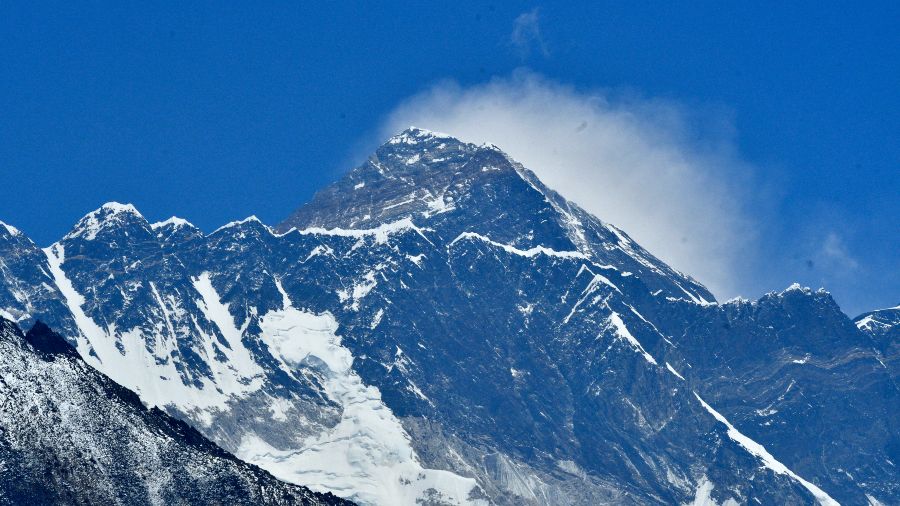 China intends to expand its surveillance to the upper part of the snowy world, which it shares with Nepal, to prevent COVID-19 infections, according to media.

China’s announcement of the establishment of a “separation line” at the summit of Everest, to prevent infection with the Covid-19 virus among mountaineers who ascend to the world’s highest summit from the Tibetan slope, has caused confusion and controversy in Nepal.

Although the border has been practically closed since March 2020, China intends to extend its surveillance to the snowy upper part of the world, which it shares with Nepal, at 8,848 meters above sea level.

The Chinese measure, revealed by state-run Xinhua, comes amid fears of an outbreak of SARS-CoV-2 at the Everest base camp in Nepal, but mountain experts and officials from the Himalayan country have indicated that it is not possible to divide the region. Everest summit.

China News Agency (Xinhua) reported on Monday that high mountain guides will erect a demarcation line at the top before climbing is allowed on the (northern) Chinese side.

The proposal was made at a press conference of the director of the Tibetan Mountaineering Association.

You may be interested: China, on the verge of seizing the land of a European country due to its high debts that it cannot pay

The news agency has not specified how China will specifically define its territory on the narrow summit of the world’s tallest mountain, where only a few climbers can survive at any time.

The official start of the ascent of Mount Everest is approaching, after Nepalese authorities closed the world’s highest summit last year due to the pandemic. Photo: EFE

The head of the Nepal Mountaineering Association, Santa Bear Lama, expressed doubts about this.

“I am not aware of the decision, but there is only one summit, and it will be practically impossible to separate the climbers from the two sides,” Santa Bear Lama said in remarks carried by Agence France-Presse.

The former president of the Nepal Mountaineering Association, Ang Chering Sherpa, assured Efe that “no one is clear about what this dividing line means”.

“If the idea is to maintain physical separation or some kind of social distancing, then nothing will happen. But anything else is a joke.”

“Is it a rope? Who will fix it and where?” Said Mingma Sherpa, whose agency runs the ascent of 130 of the 408 mountaineers who are preparing to crown Everest this spring.

A record in the history of the Himalayan country comes after the Nepalese authorities completely closed the world’s highest summit in 2020 due to the epidemic.

On the other hand, according to Mingma Sherpa, the number of Chinese climbers is “very small”.

You may be interested: A ‘black fungus’, a strange and deadly infection among COVID-19 patients, has been discovered in India

China, which has not granted any permits to foreigners since the start of the epidemic for fear of contagion, said on Sunday that a group of 21 climbers from that country were on their way to the summit of Everest from the northern part.

The summit can be climbed from both sides and both roads are close to the summit, which is a small hill of snow that can accommodate less than ten people, and sometimes climbers are forced to stand in a queue as he portrayed him in his famous image. For “Nirmal Jam” Borga in 2019.

See also  'When Harry Met Santa': A Norwegian Postal Service Hung video where a Christmas character falls in love with a man

There is no news from China

The Chinese announcement also sparked concern in the government of Nepal, according to Rudra Singh Tamang, director-general of the Department of Tourism, the government agency responsible for managing the issuance of climbing permits to Everest.

Tamang said that the Chinese government has not officially announced its intentions towards Nepal, while Everest is an international border, and in his opinion, no one can establish a “dividing line” at the summit.

With the arrival of a second deadly wave of the Coronavirus in Nepal, twelve Sherpas reached the first summit of Everest during the epidemic last Friday, paving the way for hundreds of mountain climbers who await their turn at the Nepalese base camp.

About 60 climbers reached the summit this Tuesday, including a thirteen-man team of Bahrain’s Royal Guard, led by Prince Muhammad Hamad Muhammad Al Khalifa, an expedition surrounded by controversy after it brought in a shipment of 2,000 doses of Chinese. Vaccine without prior permission.

Fears of a COVID-19 outbreak have increased in Everest camp in recent weeks, after the first positive confirmation in April and several subsequent plane transfers due to suspected cases, despite the Nepalese government’s insistence that there was no cause for panic.

You may be interested: Panic in China over leopards fleeing from the park