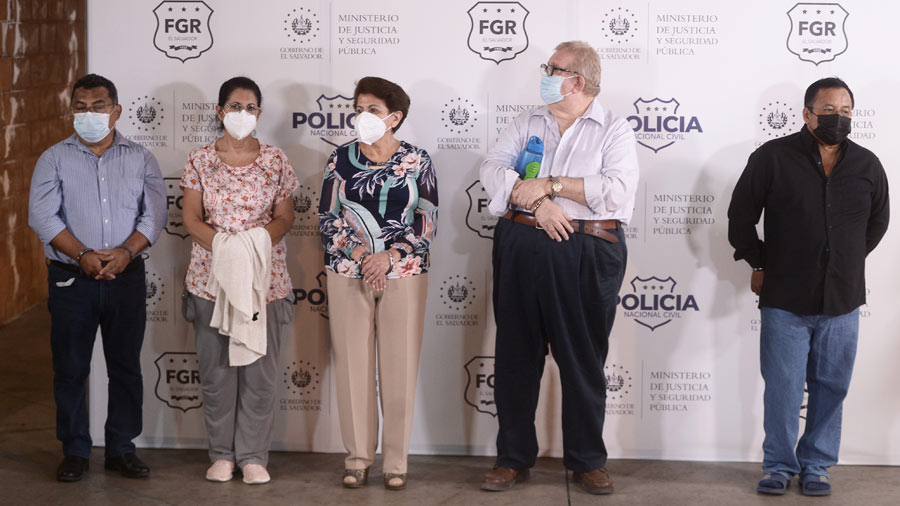 FGR informs that tomorrow, at 9:00 AM, he will file an application with the San Salvador Duty Magistrate against the 10 former officials

Money laundering, embezzlement and illicit enrichment are the crimes that the Public Prosecutor’s Office will attribute to 10 former officials in the government of Mauricio Funes. The Public Prosecution announced that it will present the formal request (the indictment) tomorrow, Sunday, before the alternate justice of the peace in San Salvador.

“Sunday, July 25, FGR_SV will file an application, at 9:00 am, before the Duty Magistrate of San Salvador, against 10 former officials of the government of Mauricio Funes (2009-2014),” the foundation wrote. On the social network.

In addition, the arrests of Salvador Sanchez Ceren remain pending for crimes allegedly committed while he was Vice President of the Republic between 2009 and 2014; Gerson Martinez, former Secretary of Public Works; Manuel Orlando Quinteros Aguilar, former Minister of Public Works; Lena Paul, former Minister of Environment and Natural Resources (MARN); and José Guillermo Lopez Suárez, who served as Minister of Agriculture between 2010 and 2012 and Chairman of the Ports Independent Executive Committee (CEPA).

The FMLN described the arrests as “political persecution” by Najib Boukil’s regime.

FMLN Representative Marlene Funes denounced that prosecutors carried out “selective justice” with these arrests and that what was required was to raise Bukele’s image.

“This is selective justice, it is a reality that is being built in order to raise the profile of the president who, thanks to the bitcoin law and the increase in the base basket, is gradually declining,” Funes said.

In addition, he asserted that he could not be trusted since the Attorney General, Rodolfo Delgado, was forced into office on 1 May by the Bukele regime, Funes explained.

For its part, the Foundation for Law Enforcement Studies (Fesbad) described, through a statement, the arrest of former officials as an “abuse of power.”

“The actions that took place yesterday (Thursday) in the arrest of former government officials occurred through abuse of power and by clear indications of abuse. Where they were violated at least: due process, the presumption of innocence, the right to a lawyer, proportionality and respect for human dignity; which are aspects that must be observed from the beginning of the procedure,” Fespad stated in the letter.

In this sense, he considered that the arrests placed El Salvador in the context of the 1970s and 1980s, “a time when respect for civil rights was much less than an aspiration,” he said.

Similarly, the Salvadoran Foundation for Economic and Social Development (Fusades) issued a statement informing that due process of law is an indispensable constitutional guarantee.

“In every rule of law, the justice system must operate strictly in accordance with the constitutional system and the laws regulating its powers so that there is no impunity, but no abuses of power. They explained that due process and fundamental rights must always be respected.”

They also made it clear that neither the attorney general’s office nor the judicial branch should be used for political purposes, including initiating proceedings only when there is sufficient evidence that a crime has been committed, and judges can act freely, without undue pressure or interference.

The Public Prosecutor who was sacked by the ruling assembly on the first of last May, Raul Melara, stressed that the investigations taking place today had begun and refined by his administration, and that a greater number of missing, he said.

This, in a cross-word on Twitter between Melara and New Ideas deputy, Alexia Rivas.

“FMLNoficial wants the former attorney general back, because that person, even though he was wearing the tricolor shirt, would have accepted the ‘dialogues’ that were always going on,” MP Rivas said.

Melara replied: “This deputy, he is the prosecutor who initiated and cleared all the investigations going on today. And there is a lot to go on….”