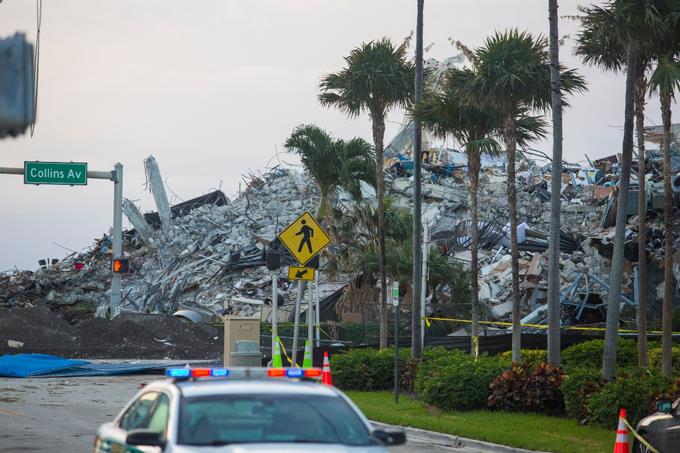 Ten days after most of its structure collapsed, what was left of a 12-story building in Surfside, near Miami, was demolished Sunday night with a controlled explosion just before Tropical Storm Elsa reached Florida.

The search for victims was halted on Saturday in preparation for demolition. The provisional balance of the disaster is 24 dead and 121 missing.

Most of the Champlain Towers South building collapsed in the early hours of June 24, causing a huge cloud of dust, in one of the biggest urban disasters in American history.

Authorities feared that the rest of the building would collapse, putting rescuers at risk. Those fears were exacerbated by the arrival of Tropical Storm Elsa, scheduled for Tuesday, in Florida.

“The demolition itself is limited to the area around the building,” Miami-Dade County Mayor Daniela Levine warned during a news conference Sunday.

“However, there are dust and other particles that are an inevitable byproduct of all kinds of demolitions, and as a precaution, we urge residents of the vicinity to stay indoors,” he added.

“Destroying this building, given a storm approached and we had to do it anyway, is wise,” Florida Governor Ron DeSantis said Saturday.

Levin said the “controlled demolition of the building” was “essential to broaden” the search, as teams were unable to go into more detail due to the risk of collapse.

President Joe Biden visited the scene on Thursday and met with relatives of the victims, who improvised a memorial on a metal grid covered with pictures of the dead and missing and decorated with flowers and candles.

Survivors reported that they were awakened around 1:30 a.m. (05:30 GMT) on the day of the avalanche by what appeared to be thunder that shook their rooms.

Rescue teams who arrived moments after the building collapsed helped evacuate dozens of residents and pulled a teenager out from under the rubble.

No other survivors have been found despite the deployment of sniffer dogs and cranes to lift the rubble.

Among the disappeared are dozens of Latin Americans from Argentina, Colombia, Chile, Paraguay and Uruguay.

Although the hypothesis of a failure to maintain the building has been put forward, there is no clear answer as to what caused the collapse.

“We don’t have solid evidence of what happened,” Biden said Thursday, referring to “a number of questions.”

Among them, he mentioned building maintenance and structure, nearby construction sites, and rising water levels.

A 2018 report by city officials revealed concerns of “significant structural damage” to the complex, from the concrete slab under the pool deck to the columns and beams in the parking lot.