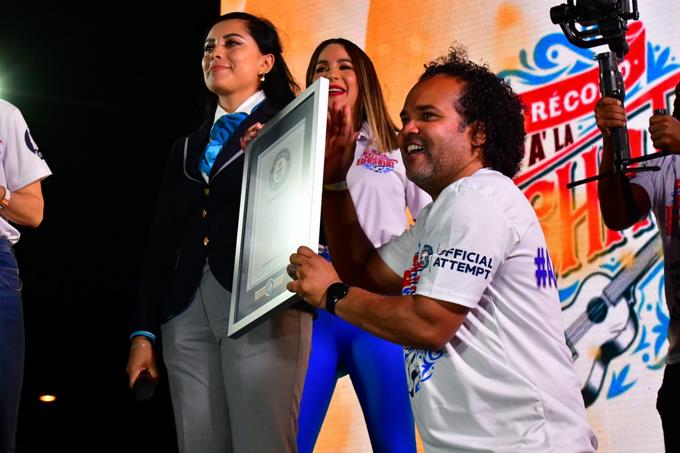 The Dominican Republic was crowned on Saturday evening with “Un Record pa` la Bachata”, winning the Guinness World Records title for the largest number of couples dancing bachata at one time.

“Unfortunately Poland has lost its Guinness World Record!” said Susanna Reyes, the official representative of the Guinness Book of Records!

Reyes noted that the number of people excluded was two, the official number being For this Guinness World Record is 489 pairs.

Official Judge Susanna Reyes This Saturday’s event only shows that the Dominican Republic has the potential to exceed its own goals, he said, adding that there is always a call from Guinness World Records to continue to exceed itself in all of its goals.

“This is proof that work, perseverance, passion and dedication give results. I am very happy to have been a part of this,” he said.

At the same time, he noted, happiness is taken from the Dominicans, knowing that they are a self-regulating community, and that when they have a common goal, they make it possible.

“Guinness record here, no one dances bachata more than the Dominican” The expressions that were heard from the participants were after the official arbitration judge ratified the Dominican Republic.

For his part, Alberto Zias took the opportunity to ask the Dominican authorities from today 11 December to declare the national day of bachata, as happened with Merengue.

Zias expressed his happiness with this achievement, saying, “This is a request from Luis Segura, and we have joined him to ask and demand that our authorities declare a national bachata day.”

He also indicated that the preparation took 4 months and that with the issue of Covid-19, the effort was greater, but the result was positive.

“Doing more is what makes us all bigger today, to be able to bring positive news to the Dominicans and for the world to understand that no one can dance bachata more than the Dominican,” Zias said.

Both the participants and the production team have completed the Covid-19 vaccination phase, a measure to prevent the virus.

The national achievement joins a series of events that coincide with this date, on December 11 the album “Bachata Rosa” by Juan Luis Guerra was released and the United Nations Educational, Scientific and Cultural Organization declared bachata as an intangible heritage of human culture (UNESCO).

Marcos Taveras and Laura Ramirez were the responsible choreographers, which for several months prepared dozens of dance schools that supported the event.