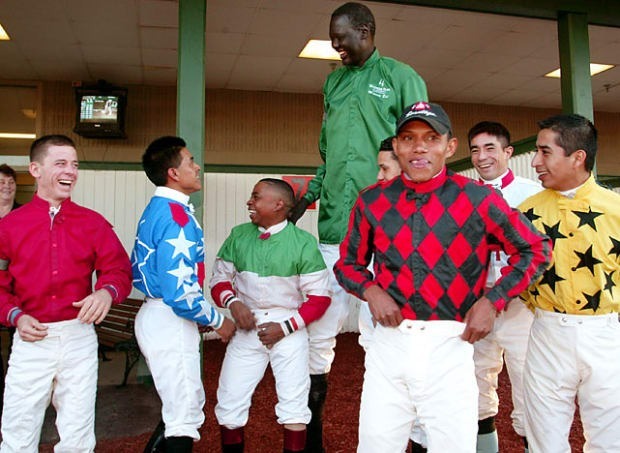 The physique of jockeys plays a really important role in horse racing. Most jockeys have to go on a special diet to slim down their weight in order to achieve faster times. This is why tall jockeys that usually weigh more do not do well in horse racing.

Even though there are no height limits in horse racing for jockeys, usually most competitors are fairly short just because they have to meet the weight limits. On average jockeys stand around 4ft 10 in to 5ft 7in.

However, sometimes we can see an athlete that chooses a profession that is unfit for their physique. This is where Manute Bol comes in in horse racing.

Can you imagine an NBA athlete becoming a jockey? – Yea, something doesn’t fit here. With that said, no matter his size Manute Bol became the tallest jockey ever to race in the sport.

Even though it is odd to see NBA players competing in horse racing as jockeys, there is no rule that forbids this from happening except the weight limit on professional racing.

So, how did Manute Bol become the tallest horse jockey ever?

Well, it all started as he became a licensed jockey with the Indiana Horse Racing Commission in an effort to raise money for his native country. It seems like this was only for a show or an event and claiming the world’s tallest jockey record also means something.

This was not the first time that Bol has taken up a new sport in promotion in order to support his Ring True Foundation, which raises money and awareness regarding problems in civil war-torn Sudan.

He also played for the Indianapolis Ice of the Central Hockey League for a promotional event and competed in Fox TV’s Celebrity Boxing Show to beat former NFL player William. It seems like Manute Bol is a true athlete undertaking every sport in the world without letting his physique get in the way.

Manute Bol was 7-foot-7 which is also pretty tall even for NBA standards. He played for 11 seasons in the NBA on four teams, and due to his height, he managed to block more shots than anyone in league history.

However, becoming a licensed jockey put Bol on the horse racing map since his name is written as the tallest jockey in the history of the sport, despite the fact that he hasn’t competed in any big horse racing events.

Of course, due to his height, he wouldn’t find much success in horse racing, which is a sport where agility and speed are important. However, becoming a jockey at 7-foot-7 is an incredible thing to witness.

Manute can still be seen at the tracks, so don’t be surprised to see him at the stands on the Breeders’ Cup or the Kentucky Derby.

How Tall You Should Be in Order to Become a Jockey?

When it comes to height in horse racing, there are no strict rules that jockeys must follow. However, since with height comes weight, it is hard to meet all the weight requirements if you are taller than usual.

As a rule of thumb, professional flat jockeys weigh around 8 stone, while jump jockeys, can go up to 9 stone. Since most jockey’s are lightweight, the average height of a jockey ranges from 4”10 to 5”6 feet.

See also  BEN SIMMONS ON BACK TO PHILADELPHIA: I expected more boos

The heaviest jockey ever was Albert Johnson, back in 1929, and he is much smaller than Bol. Now even though Maunte Bol was very tall, his built was quite unique. Due to its height, he was skinny enough and weight only 91 kilograms (200lb).

Considering that average weight of a jockey is from 108 to 118lb, it is obvious that he wouldn’t perform well in horse racing. The good thing is that all of this was for a promotional charity event, that put Bol in the horse racing history books at the tallest jockey ever.