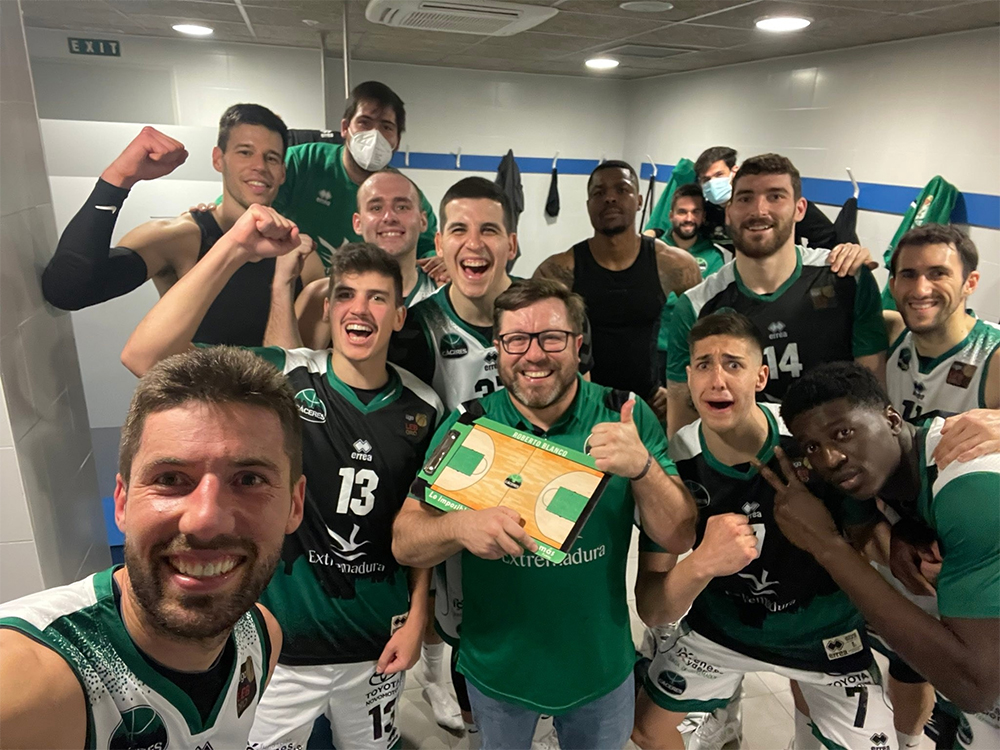 With a great start it seemed Unicaja Banco Oviedo or ICG Lleida had taken on the team name Revelation, but with the Asturian team mired in “depression” after the departure of Frey’s character and the people of Lleida with several matches postponed due to health reasons, they saw how the green of Caceres, a World Heritage Site, came from back. In a season so egalitarian and with a very large platoon in the playoffs, Extremadura was the first with 12 wins in twenty games played, which is in theory the streak that signals redemption (would this course? be enough?).

Once again with a mediocre project, they did not even notice the departure of Sergio Perez from the sports department towards COB, and the arrival of Eduardo Pascual, who is very experienced and who immediately showed his hand with good decisions that paid off.

Without a doubt, the focus of this success is his coach, Roberto Blanco, the coach who lives it, friendly and chatty, but with very clear ideas, with a commitment and a very specific style of play, who has achieved results for another. season. A very feisty team, one of those who does not give up the ball in order to get lost, with many variants, with clear roles, without selfishness, and something very important, where their fans can feel identified with that fighting character.

In all the teams there have been ups and downs, some are managing it worse, some are getting swallowed up, some have minimal inconvenience, and Caceres, off to a good start (4 wins in the first five matches of the competition), knew how to get out of His little bump when he conceded his net after five consecutive losses. Playing matches against “direct competitors” from the lower and central region, he jumped off the bench in Granada, defeated GBC and secured his place in the qualifying table by defeating Colstantin Palma and Banias.

Another important aspect is the good performance of the mold. the Killer Devin Schmidt On the ocean and the region, the warrior Ben Mbala were the leading statistical theorists, and they did not fail in their mission. But beyond that, Caceres, with Blanco on the bench, is where players seek compensation and a relaunch. We just showed up Optimization of Pelemen and Dukan From last season to the current season. A basic and with his versatility, Conogoleño reminds of that player who wowed with OCB after some rather fateful seasons. For his part, the Croatian, who came to play in the NBA and is known to be “cool”, has an important role in many matches with his quality. But watch the maturity of Jorge Sanz, happy to repeat his stay after seasons on the move, Olizola suffering far from the “rest radius” or the return of the more mature Carlos Toledo, more than a player. The bets have gone well, too: Jaume Lobo grows with the season behind the influence of his microwave player with his goal and Mateo Díaz strives to grow in moderation and game direction in a style that fits like a glove. Even Mano Rodriguez, absent through injury in the first matches, is already putting his wisdom on the right track.

To feel the atmosphere of euphoria and pride that the city of Cáceres itself feels, nothing is better than going to a qualified pen in said city like Manu Coralisathe narrator of team games in Feel TV CaceresWhich tells us:

Verdinegro’s fantastic season leads fans to dream of extraordinary achievements for the club. Far from these two back-to-back semifinals in Aranzana and Frade times or promotion from LEB Plata with Bohigas, as big successes. No one can deny that apparently so far there is a license to destroy the accidental roof. Her performance does not go unnoticed by the LEB Oro community (view this article). However, there is a strange circumstance that the club in the city itself does not end up attracting people. Except for the match against Estudiantes, not only did the fans come en masse, it’s the least I can remember on this second stage in the gold medal. In other words, there have been no such weak entries in Multipurpose since the team played silver.

It is already usual not to reach 1,000 people in home games, with a capacity of up to 6,500 spectators. Among the reasons are the comparison and longing of the people to the city’s years in ACB, the lack of the club and its publicity in the streets or the economic problems caused by the lack of private investment and the excessive dependence on public money. Namely, because they seem eternal and bore both the tireless fans on the wing and those who would only come if the team played the highest category in the National Basketball Association.

I know there are people who appreciate it in its fair measure, but everyone who hasn’t is still in time to realize that a team that has nearly struggled to redemption year after year has an almost unique opportunity to break the door less. The players and coaches have hard earned that in every multi-purpose match, the green chairs are seen less and the applause heard more.

At this point, with a good chunk of the second round in place, Caceres did it again. Once again, with a modest project, which achieves great results, specifically, he does not let himself be dragged down by defeats, even if they are huge, and wants more. Now it’s their turn on the calendar at that point where they added a first-round defeat cycle, but the Green and Black team wants to take off the mask and look any opponent in the eye, no matter how strong they are. .

See also  When will he be absent at DC United

I love that Charging …