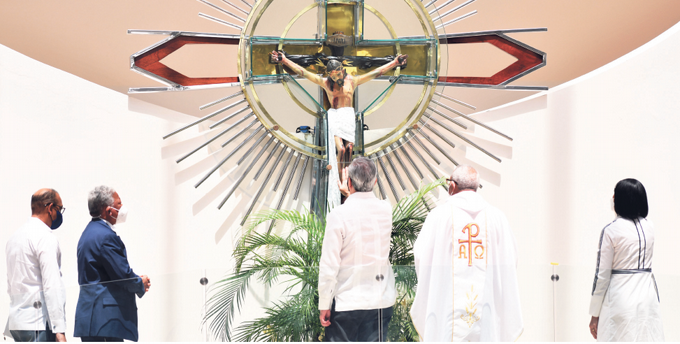 With hundreds of people in attendance at the official opening ceremony of the Temple of Santo Cristo de los Milagros, yesterday President Luis Abenader and the highest Catholic authority led a great deal of dedication to the religious structure.

Abenader also took advantage of the occasion and, after reminding the ecclesiastical authorities, promised to rehabilitate and finish two roads linking the province of Monte Plata.

Since the early hours of Friday morning, hundreds of parishioners from the Bayaguana community have been in the vicinity of the sanctuary to be able to attend the mass made official by the Archbishop of Santo Domingo, Monsignor Francisco Azuria Acosta.

The liturgy and celebration began at 10:00 a.m. and continued until just over 1:00 p.m., with the Dominican president being one of the last to speak. At the beginning of his presentation, Abenader expressed that they “will always support the Catholic Church” and that from the first meeting with the Archbishop he promised to end the excommunication.

“We immediately had our first meeting with Archbishop Ussuria, and we promised to continue this work, to continue, because as President not only this work, but I decided to have the state policy of continuing the work of my predecessors,” he commented.

In this sense, the President announced that the second phase of construction of the campus, which will include the perimeter fencing, offices and service areas, has already been approved. In addition to the sanctuary, and in response to one of the priests who spoke previously, Abenadir reported that the rehabilitation of the Mila highway leading to Payagwana began last Monday.

Likewise, he said the road from Payagwana to the province of Hato Mayor, which was started in the government of Hipólito Mejia, will “try” to finish it this year, and if not completed, it will be completed next February.

Holding the microphone after being congratulated on serving in the position for five years, Monsignor Osoria said that “a lot of money” was invested in Santuario Santo Cristo de los Milagros and that “there will be people criticizing the investment.”

Allah
investment.
“Here we invested a lot of effort, a lot of resources, a lot of money. The government has supported us with a lot of money, but without any care we have devoted to God and the investment in God will always be small,” said Ozuria, recalling the three chiefs who committed to building this shrine.