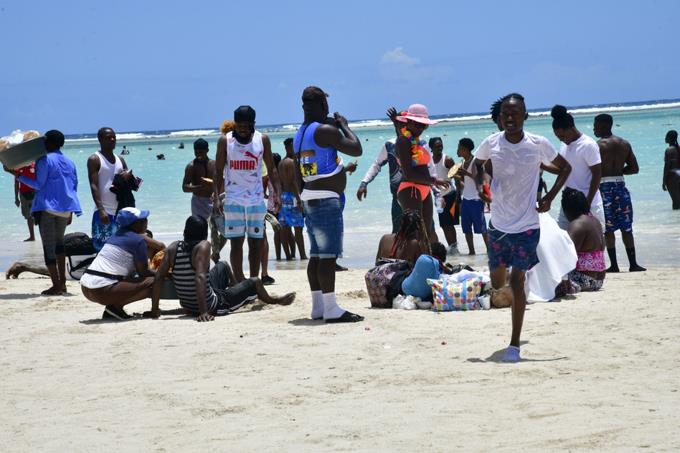 With visiting different beaches in the Dominican Republic such as Guayacanes, Juan Dolio and Boca Chica, The tourist drop can be seen in the first two, while the latter “steals the show” with a large number of attendees.

From sitting down to eating fish, sunbathing and other enjoying the Yankees, it is possible to see the swimmers.

In each of the marine beauties visited, the presence of various authorities responsible for the protection of local and foreign citizens was noted.

“Here we share as a family, I came because my sister arrived from the US and we went out to have a little fun,” said Dhyana Rojas, a visitor to Boca Chica.

Jose Alfredo Rodriguez, a father-in-law who decided to take a “romantic trip” taking advantage of the fact that his grandmother is looking after his children in La Vega province, commented:

“I like to come to this piece of Guayacanes because there are not many people, because Covid-19 is not gone yet, I ran away with my wife and we are enjoying it.”

The Dominican Red Cross and the Civil Defense They are located in spas in different provinces of the country, with the task of taking bathers outside at 6:00 in the afternoon.

“We are here to help the bathers and respond to any emergency that may arise,” explained Julian Ramos, who is in charge of the point located in Playa Guayacanes.

He also said that the use or entry of bottles for children without the supervision of their parents or guardians is prohibited.

In Playa Guayacanes, a salesman whose name remains unknown explained that despite the fact that they are part of a guild, he does not “confront” them because their leader benefits from these actions and those who have the audacity to contradict them run with the disadvantages of being attacked.

And the man pointed out: “Now everything is going against us, we are here temporarily while tourism builds the square, what I sell for 300, one of them takes 1000 from you.”

He also explained that they have to pay taxes to different institutions and by the way they have to change the union card twice a year.

For her part, Wendy Reyes, at Playa Juan Dolio, expressed her dismay. Reyes has a business in this spa that costs 500 pesos per table while this item is in the “buscones” between 1,000 a 1500 pesos.

Although he said selling is “slow,” he did mention that this may vary because each one has some type of customer.

At the exit to the east of the Dominican capital, there was no crowding on the second day of Holy Week

Vehicle traffic on the roads to Las Américas Toll was quiet with a marked reduction in congestion in the early hours of Good Friday.

During a tour of that region, a team of reporters from this newspaper was able to verify the low flow of cars that were traveling in order to leave the capital.

In its surroundings it was possible to observe dozens of members Ministry of Public Works and Communications (MOPC) And General Administration of Traffic and Land Transport (Digesett) Doing its business to assist and monitor travelers.

Because of the Holy Week holiday, from Holy Wednesday many residents of the Dominican capital traveled to the interior of the country to visit relatives or for a holiday.

The picture was different yesterday. The exodus of citizens leaving Greater Santo Domingo was reflected in the highways of Duarte, Sanchez Vieja, C de Noviembre and Las America.

And the traffic jams were noisy, especially in the afternoon, arriving in queues of cars around the two-kilometre toll.