Caroline Aquino walks to the altar: “With God” she marries 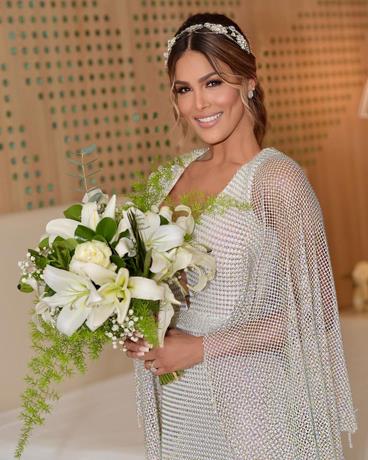 On Sunday, spokeswoman Caroline Aquino posted a photo dressed as a bride and the magic phrase: “With God,” which instantly led to dozens of congratulations and blessings by indicating that she will marry.

Photography in Cap Cana has opened up the forecast of a wedding announced since September 2019, until a possible date set in the year 2020 that was recently completed.

Then he posted another picture with his mother Teresa and his son Luisito and a message that read: “At this moment, hand in hand with my mother and son is a gift from God.”

The wedding was a surprise, “It was not planned this way, he asked her to marry him at the resort they were in and took advantage of the fact that close relatives were there and proceeded,” a person close to him told Listín Diario.

In 2019, the presenter was surprised that her partner and the father of her son, Luis Almanzar, asked her to marry him in a church in Cotoy (Sanchez Ramirez County).

After rumors spread on social media, Caroline confirmed the news in the space that leads “end to end” (Channel 15), saying that it is true, but they have been living together for three years.

“It was a very intimate moment. Regarding God’s work at that moment in the church, they asked that no one use a cell phone, that no one record it, and that no one take pictures so that it would remain in the memory of everyone present. (In 2019) when colleagues asked her how to apply:

The young woman added at the time that the wedding would be next year 2020, and in Santo Domingo, which did not happen.

She and her partner have a son, Luis Alberto who was born in 2016.