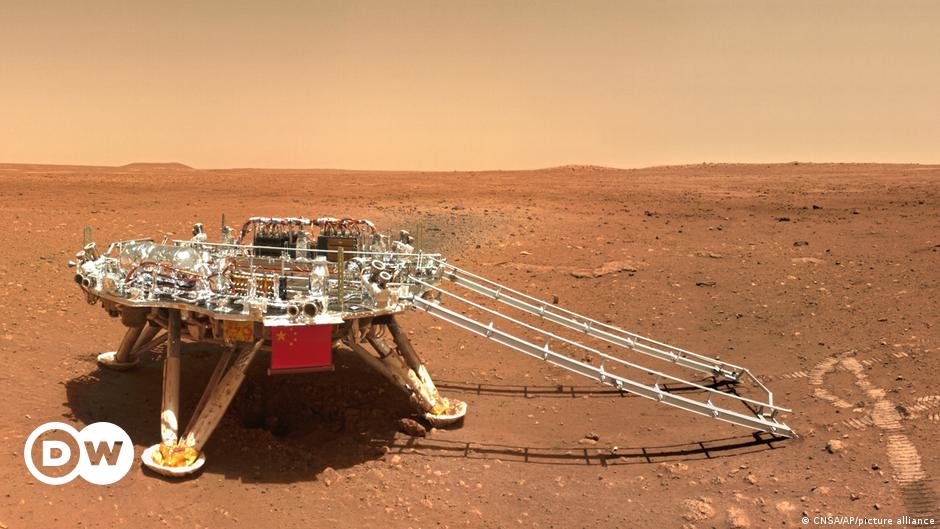 The China National Space Administration (ANEC) on Friday (11.06.2021) published a 360-degree panoramic image and two other color images of the surface of Mars and the landing module devices of the Tianwen-1 probe, which have arrived. The surface of the red planet on May 15.

The panorama shows the areas around the landing zone, a flat, rocky and seductive land, captured by the scout rover “Zhurong” (named after the god of fire in ancient Chinese mythology) before leaving, on May 22, the platform that touched the land of Mars.

“The nearby surface is relatively flat, with smooth, light-colored stones of various sizes scattered and semi-buried. There is a hole in the bottom with darker and more angular stones in the margin,” ANEC details in the text posted on its website.

The second photo shows the landing platform, with the descent ramp “Zhurong” – also the author of this photo – and the Chinese flag fluttered. Meanwhile, in the third photo, “Zhurong” detached from the detachable camera that was usually located in the basement, and retreated a few meters away.

Image of the rover and platform, shown further in the background, from a ground level perspective.

According to ANEC, the orbiter is in good condition and the rover has been operating on the Martian surface for 28 days on Mars.

“Zhurong” is part of the Chinese mission Tianwen-1, which was sent into space in July 2020 and whose landing probe reached the surface of the planet on May 15, in the southern part of the so-called Utopia Planitia, which is plain. It is located in the northern hemisphere.

Tianwen-1 (whose name can be translated as “Heavenly Questions”) is China’s first expedition to Mars and the first in history to combine travel, orbital entry and landing in a single mission.

Chinese scientists plan to find more evidence of the presence of water or ice on the planet, as well as conduct research on the physical composition of the surface of Mars or the characteristics of the climate.