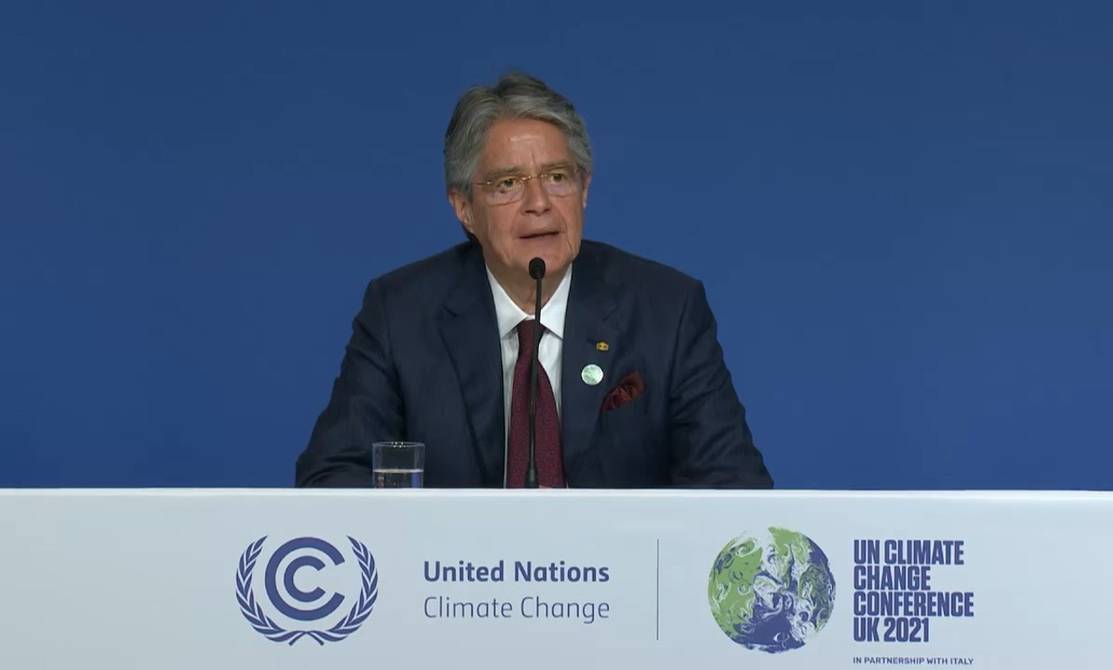 The new marine reserve in the “Enchanted Islands” will add to “more than 130,000 square kilometers of its waters, which are a protected marine reserve.”

The President of Ecuador, Guillermo Lasso, offered Monday at COP26 the creation of a new 60,000-square-kilometre marine reserve in the Galapagos in exchange for “the largest conservation debt swap ever in the world.”

“This Ecuadorian decision will cause financial proposals to swap debt for custody. We estimate that it will be the largest amount (…) that has been taken so far in the world,” Lasso said at a press conference. The United Nations Conference against Climate Change held in Glasgow, Scotland.

The Ecuadorean leader explained that his government is studying “some proposals”, but is also analyzing other forms of funding.

In the #COP26 We’ve announced a new marine reserve in the Galapagos. Its area is about 60 thousand square kilometers added to the current list, and it has the following characteristics:

“There is a possibility that the country itself, with the support of multilateral credit organizations, will be able to conduct this exchange so that all interest is placed in a trust fund in which the only beneficiary is the Ministry of Environment, Water and Transition and Ecological,” he noted.

“The idea is to build a financial institution that will allow the ministry to obtain resources in perpetuity with one goal: to perpetuate these marine reserves,” Lasso added.

The new marine reserve in the “Enchanted Islands” will add to “more than 130,000 square kilometers of its waters which are a protected marine reserve” and where “95% of the recorded species are unique in the world”.

Added to this is the Galapagos National Park, which covers an area of ​​8000 square kilometers and is considered by experts to be an archipelago of volcanic origin in the best-preserved state in the world.

The new reserve will contain 30,000 km of non-fish production area located on the Cocos mountain range and 30,000 km of longlines located in the continuation of the marine reserve in the northwest and “also serve as a living laboratory for the development of scientific research”.

The President of Ecuador stressed that the announcement came “the result of five months of dialogue with the artisanal fishing sectors as well as with the industrial fishing fleet so that they understand, as they understood, the importance of expanding this marine reserve by 60,000 km. The yards and the great potential of the largest debt-for-preservation swap ever in the world.”

“The fishing sector understands the benefits to them” with a greater abundance of biomass “in the medium and long term” in areas outside this future reserve, he added.

The funds raised by Ecuador with its proposal will be invested “in at least basic infrastructure works on the three main islands of the Galapagos archipelago” with “potable water and sanitation projects for the main islands”.

Located about a thousand kilometers west of the continental coasts, the Galapagos Islands are one of the most biodiverse ecosystems in the world, and in the past all kinds of initiatives were considered for their preservation.

Lasso added, “Ecuador’s natural wealth is recognized all over the world; although we are a country with an area of ​​only 256 thousand square kilometers, we are one of seventeen highly diverse countries, with 9.2 species per square kilometer,” added Lasso, who emphasized that “The Galapagos is considered by many to be the jewel in Ecuador’s crown.”