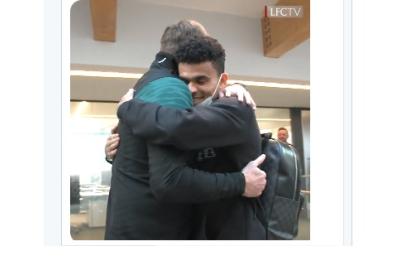 Luis Diaz played his first game in the Champions League this Wednesday with a Liverpool shirt and although he had no assists or goals, the balance was fine.

Díaz was a substitute, banging in the 57th minute, changing the reality of a team that was caught in the attack, which again collided with the wall of the Inter Milan team that defended the Italian way: pure discipline and accuracy.

In his first touch he made a goal choice, after which, the team seemed to suffer and the 0-2 victory was the result of a football needle. DD saw this for himself, Jrgen Klopp: “Louis is very natural when he comes, it’s very helpful to us. The boys who came were quite impressive. All three are very, very good.”

But he was not the only one to realize that he had given the Colombian team another wind. The Mirror described it clearly: “Globe made three more changes with Naby Keita, Jordan Henderson and Luis Diaz, introduced by Harvey Elliott, Fabinho and Sadio Mane. Dias signed for 50 50 million in January. He was one of the brightest players in the second half. And Milan forced a screener block after Trent teamed up with Alexander-Arnold.

Meanwhile, ‘Liverpool Echo’ released the headline ‘Virgil van Dijk excels and Louis Diaz cheers against Inter Milan’. Also, after giving him 7 qualifying points, he described: “The shot that motivated whenever the ball approached him and was blocked after a strong run”.