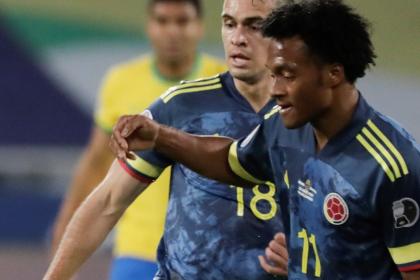 Colombia will meet their Copa America quarter-final opponent on Monday, June 28, at the last date of Group A. The bad news is that Juan Guillermo Cuadrado, one of its references, will not be suspended after receiving a second yellow card in four group stage matches.

Thus, Reinaldo Rueda’s task will be to find a replacement for Cuadrado. The coffee selector is not considered a regime change. He didn’t do that against Brazil and will definitely maintain a 4-4-2 in the first direct knockout match.

Who can replace Square?

The first choice appears to be Edwin Cardona, although not exactly in the same situation. He would enter from the left and flip with Luis Diaz, who is standing on the left side, but could do so on the right. The ‘ten’ from Colombia could also play on the right, so that no two changes were made – one in name and another in position – and there would be a talented man, clarity in the pass and strength in the auction.

Another obvious option would be Daniel Muñoz, who plays as a right-back but has a tactical memory as a right-midfielder. In this case, Stephan Medina will enter as a side and Genk’s player from Belgium will take the lead. Muñoz walks the area, knows the location and upgrades it from his inception to here.

The other two options that can be dealt with are Luis Fernando Morell or Yemi Chara. Always with Luis Diaz on the other side. They both have strength, imbalance, and talent and should be required in the tactical part to help prevent an opponent’s exit.

Renaldo Rueda has one week left. On Saturday, July 3, it will be the quarter-finals, so there is time to cement the national team’s bases and find an alternative to one of the pillars of the national team.

Who will you name it?