just awesome! Arrival of a flying car: it travels in the air at a speed of 170 kilometers per hour 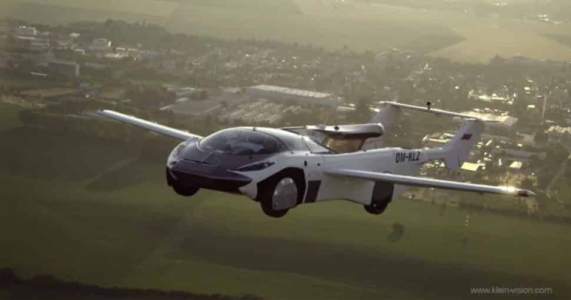 Car Wings can be spread In 35 minutes, a plane traveled 80 kilometers between Nitra and Bratislava airports, a third of the time taken by road, and then circulated like a conventional vehicle through the center of the Slovak capital.

car and airplane hybridAirCarDesigned by Slovakian Stefan Klein, it was the first vehicle of its kind to land on Bratislava International Airport After completing the distance at an average of 170 kilometers per hour.

“This journey begins a new era of dual transport vehicles. It opens a new category of transport and restores the individual freedom associated with automobiles,” Klein said, according to a statement from his company.

“The machine worked perfectly‘, reassured the Slovak after flying the two seats between Nitra and Bratislava.

After landing, with the push of a button, The plane has been converted into a sports car “In less than 3 minutes,” the inventor said.

It was noted in the flight photos how the prototype flies with two light aircraft and after landing it folds its wings and tail to be able to turn on the road.

The AirCar Prototipo 1 equipped with BMW engine 160 horsepower with fixed fan and canopy.

During 40 flying hours, this machine reached an altitude of about 2500 meters and a speed of 190 kilometers per hour.

Four years ago, Klein introduced Aeromobil 4.0 . prototype. , which is different from AirCar Not just because of its design, but because of how it transforms from an airplane into a regular vehicle, something that with the new model lasts less than three minutes.

After that, the car travels by road from the airport to the center of Bratislava.

The designer did not provide evidence At the time of AirCar marketing, which must exceed 50 flying hours.

A second prototype will follow later With minor design tweaks And with more power, which will allow you to reach a greater speed.