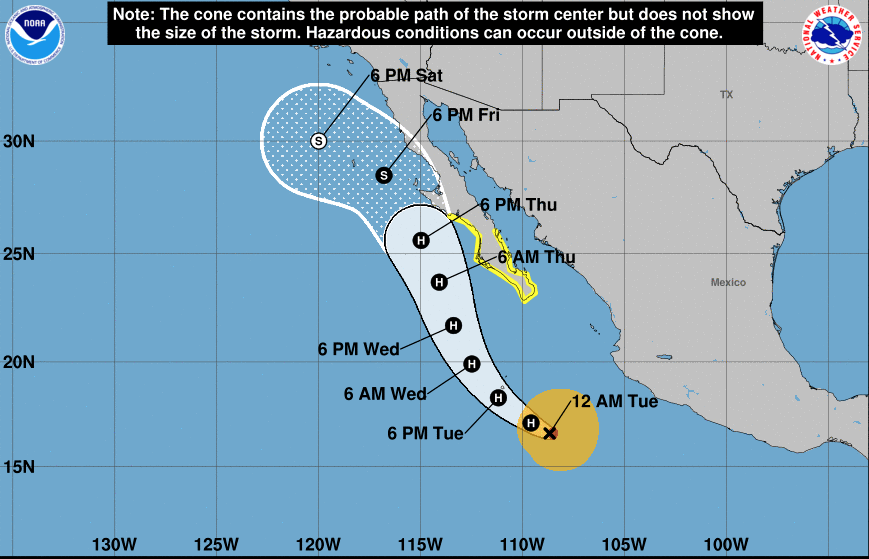 Kai gets stronger in the face of the hurricane: These are the photos he leaves 4:01

The storm surged to the level of a Category 1 hurricane Monday night with maximum sustained winds of 130 kilometers per hour, according to Mexico’s National Water Commission.

Hurricane Cay is expected to move northwest over the next five days, and remain western Mexico, including the Baja California Peninsula. It is expected to gain strength over the next 36 hours and could “become a major hurricane during that time,” according to information from the US National Hurricane Center Tuesday morning.

Hurricane Kay is expected to become a Category 2 over the next 12 hours and may reach Category 3 by Wednesday, before starting to weaken on Thursday.

The Cayenne is expected to produce between 100 and 200 mm of rain, with isolated storms of up to 300 mm, across parts of western Mexico, including the Baja California Peninsula, through Thursday night. These amounts of rain can lead to flash floods, including landslides.

The hurricane is currently expected to run parallel to the west coast of Mexico with outlying bands hitting the coast, but the official forecast is that Kay will remain offshore and not make landfall at this time, according to Monica Jarrett, a meteorologist at CNN.

A hurricane warning has been issued for the west coast of the Baja California Peninsula from Puerto Cortes to Punta Eugenia, according to the Mexican government.

Hurricane Kay will move along the western coast of the Baja California Peninsula from late Wednesday through Friday. The storm will be at its closest and could make landfall in the central part of the peninsula by late Thursday. Kai is currently experiencing sustained winds of 136.9 km/h, making it a Category 1 hurricane. It is expected to intensify and could become a Category 3 hurricane within the next 48 hours.

The winds will be stronger if the center of the storm moves away from shore, but heavy rain is inevitable either way. Significant amounts of rain are expected from 76 to 203 mm across the Baja California Peninsula, with a chance of up to 380 mm in the central parts of the peninsula.