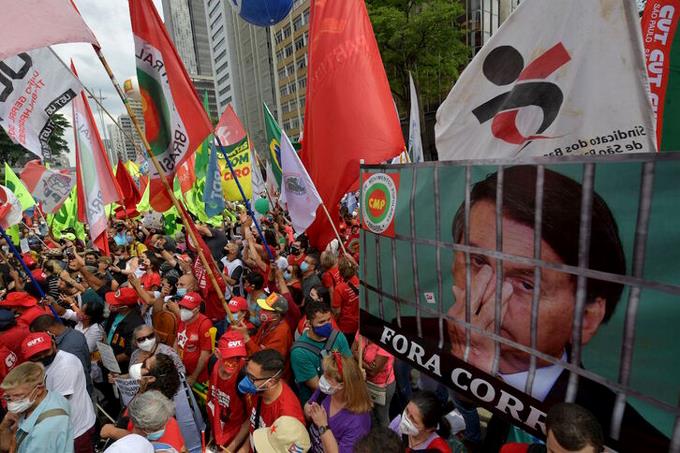 The left and center parties joined for the first time, exactly one year after the presidential election, in protests called against President Jair Bolsonaro, which mobilized thousands of Brazilians on Saturday in at least 250 cities in the country and abroad.

The demonstrations, which attracted crowds, mainly in large cities such as São Paulo and Rio de Janeiro, were called by at least 21 political parties, ten unions and dozens of social movements such as the landless and the homeless who gathered on the fronts. Brazil Folk and Buvo Sim Medo (Fearless People).

Despite the fact that the red banners of the left groups were the majority at the rallies, they were joined for the first time, albeit timidly, by those of the centrist formations, such as the Brazilian Social Democratic Party (PSDB), led by former President Fernando, Henrique Cardoso, of the Democratic Action Party (PDT), for former minister Cerro Gomez, who was the third most voted candidate in the 2018 presidential election.

Although the organizers made an effort to try to make the demonstrations supra-partisan and to welcome militants from the center, the vast majority made no secret of their preference for former President Luis Inacio Lula da Silva, Bolsonaro’s main political rival who leads everyone. Of them with great advantage, the intent to vote in the presidential election on October 2, 2022.

According to the latest opinion polls, the socialist leader, with 44% of the intention to vote, will defeat Bolsonaro (26%) without the need for a second round, who admitted that he aspires to be re-elected, without any other candidate. Exceed 10% of favoritism.

Therefore, the more moderate center and right parties are looking for a third and viable nomination that would put an end to the current political radicalism in Brazil.

But the need to express their opposition and outright rejection of Bolsonaro’s government was stronger on Saturday and it ended up uniting the various sectors of the opposition.

Reflecting again on the challenge to the presidency and who participated in the Rio rally, Ciro Gomez said by making clear that the country’s priority is to remove Bolsonaro from power and then think about elections.

“Bolsonaro does not respect democracy or the constitution. He does not want elections because he knows that he will be defeated if he is not removed sooner. It is time for us to create a broad front and combine forces against fascism. We will talk about later,” he said. Also in Rio de Janeiro, Representative Gandira Feghali, leader of the Brazilian Communist Party.

Among the multiple demands of different groups in different cities, the common slogan that brought together the left and center was “Get out with Bolsonaro,” referring to pressure on Congress to open an impeachment trial for the head of state for the various crimes and offenses he is accused of.

They also joined the protests against the high unemployment rate, which affects more than 14 million people. Against inflation that exceeds 8% per year and threatens purchasing power; Against the government’s anti-environmental rhetoric, and against increasing hunger, I was reminded of the images of people fighting for bones discarded by supermarkets in Rio that shocked the country this week.

Another demand that united various sectors was a protest against the government’s denial of the outbreak of the Covid-19 pandemic, which made Brazil one of the worst-affected countries, as it caused the deaths of more than 597,000 people and infected 21.4 million.

Huge banners calling Bolsonaro a “genocide” were displayed at nearly every demonstration.

In contrast to previous left-led rallies, in which red flags completely dominated, in Saturday’s demonstrations, the presence of several green and yellow flags of Brazil, which has become a symbol of Bolsonarista, is something that opposition fighters want. to begin to change.

“This flag belongs to the Brazilian people and we will not allow militiamen and pseudo-patriots to kidnap it,” said accountant Claris Copetti, 58, who walked in Sao Paulo next to a man waving the flag of the Workers’ Party of Lula (Party of Labor). ).