Menino Cabrera, a former basketball player, aspires to be a consultant in Santiago 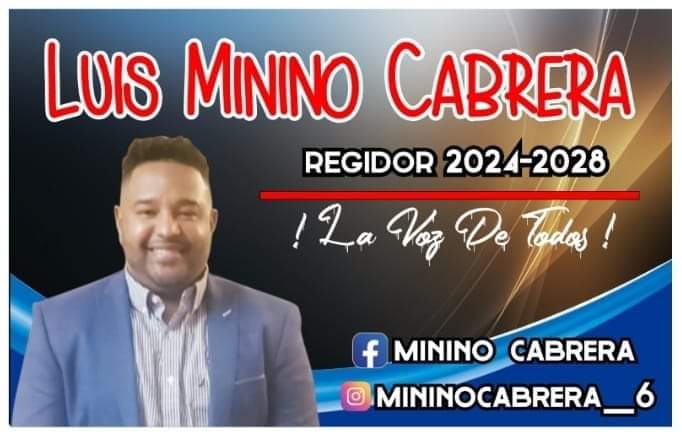 Major basketball leagues are already part of the calendar of most clubs in Santiago, including the municipalities.

We had the opportunity to visit several courts or see the “signboard” where it stands out.

But what caught our eye the most was the presence and welcome of former player Luis “Menino” Cabrera.

Athletes cry out with one voice for Menino to be a Santiago alderman in the upcoming elections.

Several months ago, I was at the Basketball League tournament in Plaza Valerio and watched how players and fans hailed the name Minino.

I thought it was something from that area, being Menino from that part of Santiago, but no, the desire extended to other neighborhoods.

I was in the Congo Square, Juan Antonio Alex, where a massive tournament is taking place, with more than enough quality, and there were posters asking for Menino Cabrera as an alderman.

Luis Menino Cabrera was on the ballot for the 2nd District and looks like he’s going to go by car.

They support it in La Joya, Baracoa, La Utra Panda, Pueblo Nuevo, Congo, and other sectors compatible with this demarcation.

Since the signs asking Menino as an alderman do not have any political party, I will try to get this information for a new batch.

What I have discovered is that there are many political organizations that have their eyes set on Luis Menino Cabrera, due to the popularity of this young former basketball player.

Colleagues who recently traveled with ACDS to New York tell me that there are a lot of people waiting for 2024 to vote for Menino Cabrera.

SQUEEZE PLAY: Jorge Lorenzo made his moto debut the day after his 15th birthday… Is there a long way to go until February 27? … Pedro Martinez … Pedro El Grande … Pedro of Cooperstown … Pedro of Manuguayapu … Pedro of the Dominican Republic … They are not the old days, when the neighbor quarreled with the boy and when he went with a complaint to the father, he gave Him again… The Congo Superior Basketball Championship is full of great personalities… National Team captain Victor Les plays and that’s awesome… Joan Santos, CEO of Cupes… Américo Delgado from La Plaza Valerio… Miguel Almonte, The son of “Shad” and the Pueblo Nuevo… Amit Gil, an important player in the country… Ariel Lopez of Gregorio Urbano Gilbert, of the Libertad neighborhood… Men call him “El Feo”, but as long as the woman doesn’t tell him, don’t Needless to describe his character… Ah, I didn’t see him, but they told me that pimentoso Oliver García, from Plaza Valerio… Yes, he’s fast on the field… I imagine he’s from Congo, there’s also “El Mu do,” who plays for Samiji … I will let Joel Castillo give me more names … I saw on one of the posters, the best local player, Adris Rodríguez, the famous Yao Ming … The catcher Yadier Molina left the cardinals to go Enjoy the crown of the Bayamón Cowboys basketball team … They were the champions of Puerto Rico … Felix Fermin sent me a voice devastated by the tragedy of the prospect Emmanol Mercado Cruz, son of journalist Miriam Cruz …. Felix was one of those people to whom Miriam went for advice. To her future player… “I don’t have the strength to call her, because I know she’s broken,” Felix wrote to me… Emmanol was buried last Friday, in the midst of massive manifestations of pain that tore us all apart… Rest in peace, ideal young lady and in solidarity with Miriam … The faint crystal ball told me that the last time the Catholic Church had three popes in the same year was in 1978, Paul VI, John Paul I and John Paul II … For today, 27.