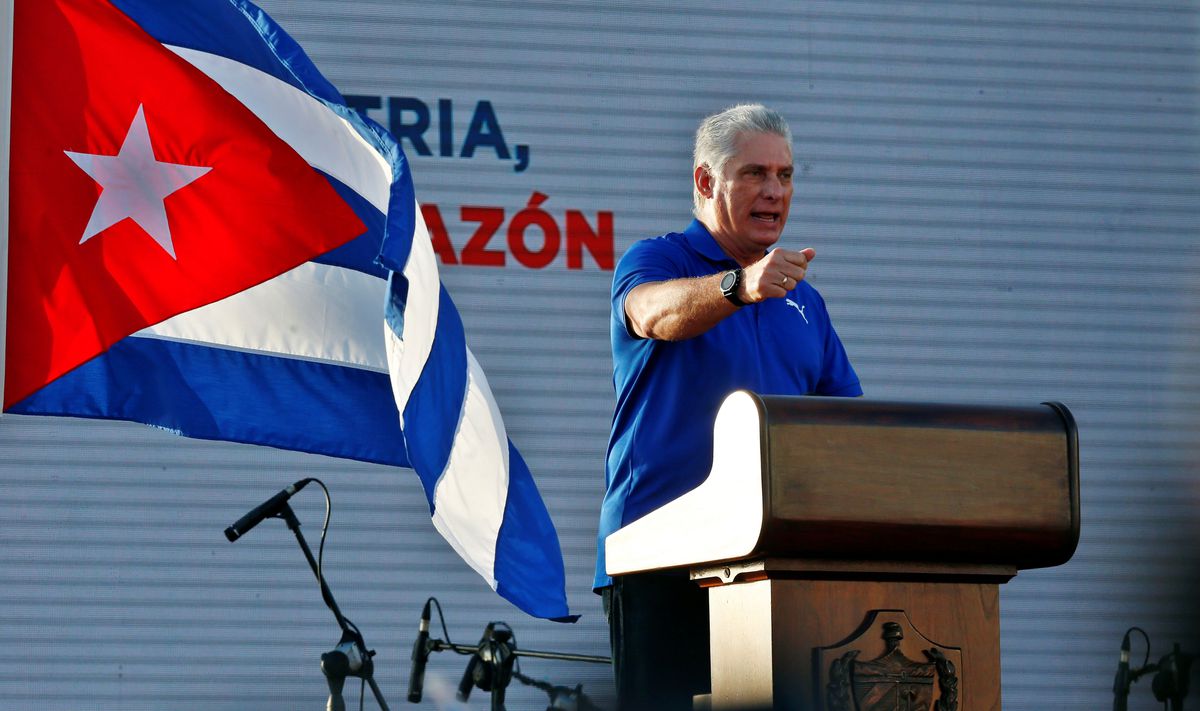 Memorials for the Independence of Mexico Which started on Wednesday night This year they have a controversial protagonist. The invitation of the Cuban President, Miguel Diaz-Canel, who will participate tomorrow Thursday in the official ceremony with Andres Manuel Lopez Obrador, sparked celebrations between demonstrations of disapproval of the leaders of the opposition. The Mexican president defended the visit, stressing that the country “will open its doors to all rulers.” Díaz-Canel, who has already arrived in Mexico City, after two months of protests against his government amid the growing stress of the population, will also join the Summit of the Community of Latin American and Caribbean Nations (CELAC) that will be held to celebrate Saturday in the capital.

Lopez Obrador confirmed that he “will be at a party on the 16th,” stressing that he also invited Joe Biden on the occasion of the September 27 events, although the US President will not be able to attend and will send Secretary of State, Anthony Blinken. Participation in the military parade The commander-in-chief of the Cuban regime sparked controversy as he was a special guest who would also give a speech. “Both civil and military authorities come to the December festivities, they come from all over the world, they are invited to Mexico. Therefore, we cannot invite some without others,” the president justified.

Welcome to Mexico “President of Cuba” Tweet embed And the consultant Tweet embed, to attend the civil-military parade to commemorate 200 years of our independence and at the 6th Summit of Heads of State #CELAC welcome! 🌎 pic.twitter.com/sq1LpsEsQU

The defense of the idea of ​​sovereignty, one of the axes of the government’s political action, dominates the visit. Just a few weeks ago, Lopez Obrador asked Biden to boycott the economic blockade of Cuba And soon “make a decision” about it. “It is a respectable invitation, from a point of view that you do not enter into it, but we must separate the political from the human, life is the most important thing, it is the principle of human rights,” the president said. Díaz-Canel personally requested his assistance with a letter and Mexico sent two shipments of humanitarian aid and medical supplies at the end of July.

“We are a free, sovereign country,” the president added when he appealed to the government. Article 89 of the Constitution, which states that the executive branch should act in diplomacy with due regard for the principles of “non-interference” and “the self-determination of peoples” and respect for human rights, among other things. “This is our foreign policy, and for this we invite everyone. Mexico’s doors are open to all rulers, we are friends of all the peoples of the world.” In the midst of the July moves, he also came out in defense of the Cuban president: “There should be no interference. The health status of the Cuban people should not be used for political purposes. This should be set aside. No politicization, no media campaigns, which is already happening all over the world.”

Díaz-Canel actually attended Lopez Obrador’s inauguration in 2018 and nearly a year later he’s back for an official visit. Before his travels, this Wednesday, he wrote on his Twitter account that “the Mexican revolution was a deep inspiration for the revolutionary movement in Latin America” ​​accompanied by the phrase “Live Fidel”. President Castro, who died in 2016, traveled twelve times to the country. It did so during the PRI mandate and also under Vicente Fox, of the PAN. On that occasion, the former Mexican president asked his Cuban counterpart to leave the Extraordinary Summit of the Americas in 2002 to avoid this Embarrassing meeting with George W. Bush. According to an audio broadcast over Havana, he told him, “It’s not very nice of a last-minute notification that you’re showing up here… I don’t know when you intend to come, but my suggestion is that you come Thursday… that you participate in the session, make your bid. Then, We have a governor’s lunch for heads of state. All inclusive, I offer you to be at that lunch and sit beside me and as soon as the event is over you’ll come back, and you’ll leave me free on Friday, that doesn’t hold Friday for me.”

Now, one of the politicians who criticized Diaz-Canel’s visit the most was the former president of PAN, Felipe Calderon. He even called Cuban a “genocide and dictator” and compared him to Hitler. “Well, it’s a good thing you don’t like it,” Lopez Obrador replied. “Put the masks out.”