Pope calls for “dialogue” at Christmas in light of the epidemic 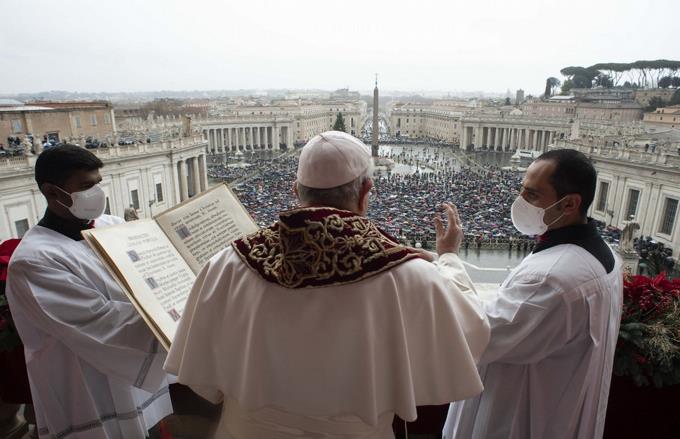 Pope Francis, on Saturday, called for dialogue to counter the tendency to turn inward caused by the Covid-19 pandemic, which celebrated Christmas for billions of people for the second year in a row.

In the traditional blessing of Urbi et Orbi on Christmas Day, the pontiff reminded the faithful gathered in St. Peter’s Square that “in this time of pandemic (…) our capacity for social relations is tested, it reinforces the tendency to come close, to defend itself, to abandon Go out, meet, collaborate.”

“In the international arena, too, there is the danger of unwillingness to dialogue, and the danger that the complexity of the crisis will lead to the selection of shortcuts, instead of the slower paths of dialogue,” he added.

As usual, the Pope recalled the regions of the world that were plagued by conflict It also addressed the economic and social repercussions of the health crisis that casts its shadow over Christmas for the second year in a row.

And Francis asked not to allow the “malignant tumor of the gangrene conflict” to spread in Ukraine, due to tensions between Kiev and Moscow, which raises fears of a military escalation.

He recalled the “forgotten” tragedies of the conflict in Yemen and Syria, which “caused many victims and countless refugees.”

Friday night, the 85-year-old pope celebrated a traditional Christmas mass at St Peter’s Basilica in Rome in front of 2,000 masked worshipers.She called on Christians to “rediscover the little things in life.”

In the city of Bethlehem, in the Occupied Palestinian Territories, only a few hundred people gathered despite the cold in Manger Square, the place where, according to Christian tradition, Jesus was born, to follow the procession of Palestinian scouts.

And in the Philippines, in addition to Covid, believers have had to contend with the aftermath of the devastating typhoon that struck the Southeast Asian archipelago last week, leaving nearly 400 people dead and tens of thousands homeless.

In a chapel with a large hole in the ceiling, floor, and submerged benches, Father Ricardo Vertudazzo presided over Christmas mass for a dozen people who just wanted a roof, food, and a nice time for Christmas.

“The important thing is that we are all safe,” says Joy Barrera, 31, at Christmas mass with her husband at San Isidro Labrador Parish Church in Alegria Municipality, northern Mindanao. ..

China reported 140 new cases of coronavirus on Saturday, the highest number in four months, mostly in the city of Xi’an, Shaanxi Province (northwest), where 13 million people have been quarantined since Thursday.

France recorded 94,000 new cases on Friday, a level not reached since March 2020, according to the authorities.

In the UK, which has also faced the rapid spread of the omicron variant, a record was broken on Friday with 122,000 new cases.

In addition, the pandemic has caused travel disruptions and according to air tracking website Flightaware.com, companies have canceled more than 4,500 flights around the world, hundreds of them in the United States, due to the omicron variant expansion of covid-19.

Nevertheless, millions of Americans have traveled to the country, despite the fact that the number of daily infections by omicron has already exceeded that of the delta and hospitals are starting to become saturated.

Although it was generally more relaxed than it was in 2020, Christmas has not been immune from this peak of infection, with restrictions doubling in many places.

The Netherlands is restricted, Spain and Greece introduced mandatory outdoor masks and Ecuador since Christmas Eve has implemented a vaccination commitment for all residents over the age of 5.

However, in some places they manage to get into the long-forgotten Christmas spirit. Most Australians were able to travel around the country again and be reunited with their relatives after a long time.

The pandemic has killed at least 5,385,564 people worldwide Since the end of 2019, according to an AFP count from official sources on Friday, although the World Health Organization estimates that the real balance may be two or three times higher.

The emergence of omicron has accelerated infections in almost all regions of the world in the past week, with the exception of the Middle East and Asia, according to AFP data.

But border closures haven’t stopped a famous reindeer-powered sleigh from roaming around the world.

Although in some places, such as Rio de Janeiro, Santa Claus parked his sleigh and arrived by helicopter to deliver food parcels to the residents of the Penha favela.