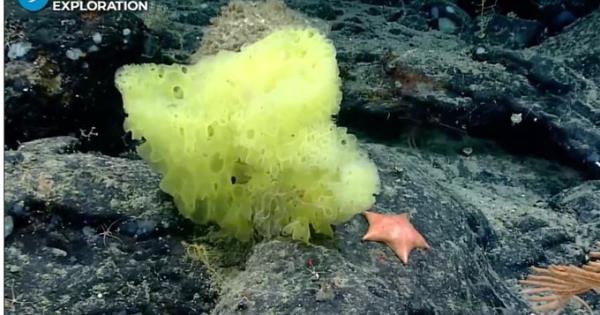 Scientist Christopher Mah of the National Oceanic and Atmospheric Administration (NOAA) was the one who discovered a yellow square sponge and a pink starfish that were together on the sea floor, who immediately noticed a resemblance to the small-screen cartoon characters.

“(Laughs)…I usually avoid these kinds of references…but cool. In real life SpongeBob and Patrick!…”, across the world on his Twitter account.

The discovery was part of recent expeditions with the help of the NOAAS Okeanos Explorer, a US Navy ship and now a National Oceanic and Atmospheric Administration (NOAA) expedition ship, which was officially launched in 2010.

Its main priority focuses on gathering scientific information about the oceans for the public and for scientific uses, the organization officials noted, noting that up to 95% of the oceans remain unexplored.

“With an impressive array of different technologies – deep-sea submarines, HD cameras, fast and efficient webcasting, and the wonders of social media, we not only have live streaming of deep-sea biology and exploration through our R/V Okeanos Explorer, we also have the ability that anyone can Roughly tune in and see discoveries as they happen and monitor the scientists who make those discoveries as they happen,” Mah explains on his official website.

According to the biologist and starfish expert, the scientific name of the yellow sponge that everyone calls “SpongeBob” is Hertwigia while the name of the sea star known as “Patrick” is Chondraster.

It did not take long for this discovery to spread on social networks, especially by the thousands of followers around the world of cartoon characters who crossed generations and whose scientific discoveries aroused enthusiasm.