Social and environmental groups march against the exploitation of natural resources 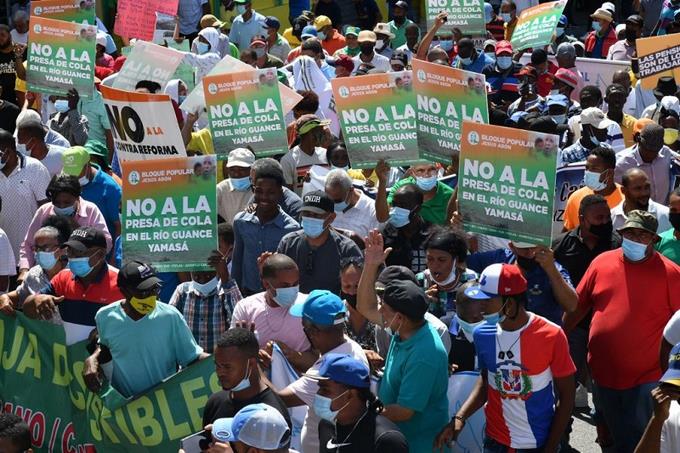 With posters and shouting in unison “No to Kula Dam,” dozens of social activists demonstrated this Sunday in Independence Park towards the National Palace, referring to the Gwanes Dam, Yamasa.

Social groups such as the Green March, Sugarcane Workers, Venatrano, Loma Miranda Camp, Defenders of the Three Causes, the National Human Rights Commission, among others, joined the “peaceful march” from early morning to defend other interests such as Barrick Gould. Withdrawal from the country and lower fuel prices.

“We are advocating that the back dam not be developed in Guanes, we already have five dams on this island, we are an island that is very vulnerable to earthquakes,” said Patricia Guerrero, who is part of the Loma Miranda camp.

He considers that President Luis Abenader with the status of the aforementioned water dam “will only think in the long term and not for the present.”

“The government is thinking about the long-term, not at the moment,” Guerrero added to various media.

Another reason behind these activists’ rallies is against the expansion of mining towards Loma de los Sete Picos and Loma Novellero.

They also indicated that they are marching to meet the environmental and social responsibilities of Barrick and Falconbridge, which they explained pollute the country’s soil and water.

For his part, Juan Hubertes, Minister of Environment and Mining, called for attention to the Guanoma River and not to “relax with the province of Monte Plata”.

More than 20 social groups participated in this demonstration, which ended at 11:35 am.

It should be noted that a military and police deployment was at each end of the Independence Park, as well as the National Palace to avoid possible accidents.