The Curiosity rover discovered a small ‘flower’ formation on Mars 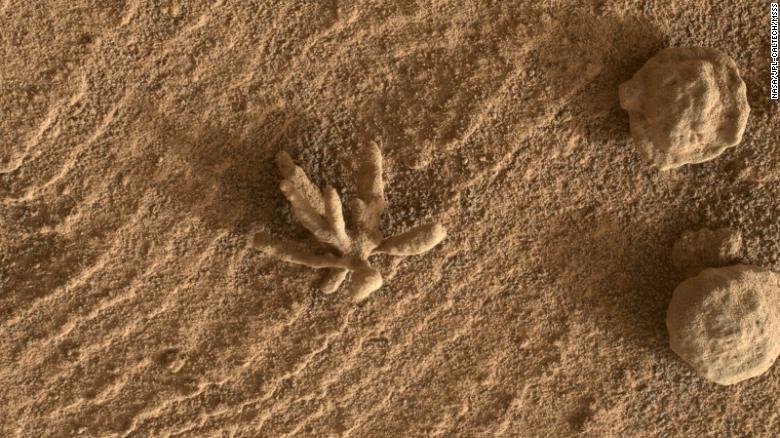 (CNN) – This is the closest you can get to finding a flower Tuesday.

The Curiosity rover stumbled in a bit of surprise while exploring the Martian rocks in Gale Greater. A rock artifact resembling a coral or a flower is smaller than a penny.

The formation found on Mars resembles a flower or coral 0:45

The “flower” of Mars and the adjacent spherical fragments were “made in ancient times, when the ore carried by water was cemented to the rock”. According to NASA.

The Curiosity rover discovered the rock on February 24 inside a gale crater smaller than a coin resembling a flower or a piece of coral. The small fragments in this photo were formed billions of years ago when the ore carried by water was cemented to the rock.

Curiosity took a picture of a small cliff array using a Mars hand lens imager on February 24, with a camera at the tip of its robotic arm.

The agency said the discovery was similar to other small features that Curiosity has discovered in the past, all of which were created when “mineralized liquids traveled through rocky pathways”. Earlier, the Opportunity Rover was also detected Tuesday “Blueberries”Small mineral pellets representing previously waterlogged soil on the Red Planet.

Each image that Curiosity collects and shares these features allows researchers to link together the chronology of the presence of water in the abyss.

Later this year, Curiosity will celebrate an important milestone: the 10th anniversary of Mars. Curiosity landed on the red planet on August 5, 2012. It has been exploring the crater and Mount Sharp at its center for over a decade.

The mission is designed to find out if microbes are suitable for life on Mars. Initially, the rover discovered chemical and mineral resources that confirmed the planet’s habitation at some point in its distant past. Since then, Curiosity has been searching the geographical record to understand when Mars was most suitable to support life.

The car-sized rover made its way to the Persverns Rover and Ingenity helicopter, which are currently exploring the 3,700-kilometer Jessero Greater. The combined efforts of these rovers will help answer the final question of whether there was life on Mars.