The Public Prosecutor’s Office is bringing the five former FMLN officials to court and accusing them of three crimes. 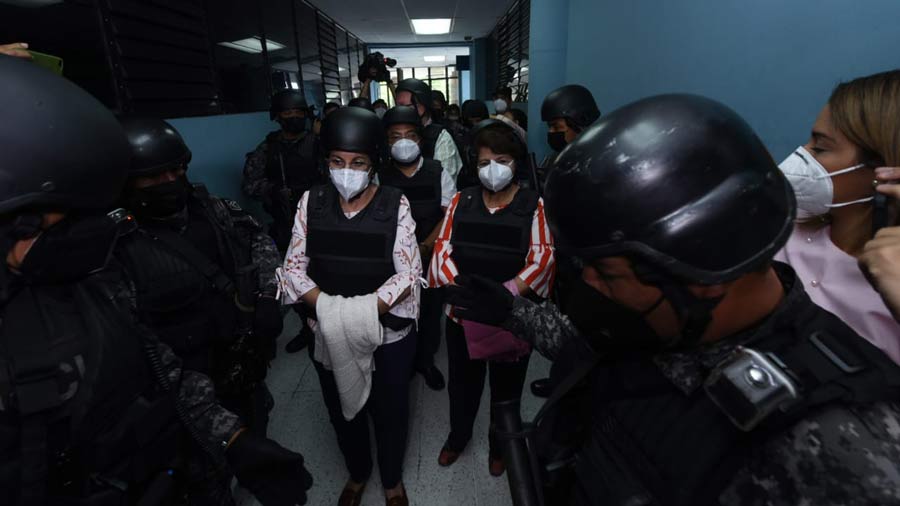 The initial hearing was scheduled for Tuesday, July 27 at 8:00 AM, and outside the Isidro Menendez Judicial Center, FMLN members and their fighters protested the arrests.

This Sunday, the Office of the Attorney General (FGR) filed the tax order against 10 former officials in the government of former President Mauricio Funes (2009-2014). They were charged with the crimes of money laundering, assets and illicit enrichment.

The initial hearing was scheduled for Tuesday, July 27 at 8:00 AM.

“All of these people are accused of the crimes of illegal enrichment and money and asset laundering,” the prosecutor in the case said while filing the application at the Second Peace Court in San Salvador. “The period of investigation corresponds to the period during which they held various public positions during the presidency of Mr. Carlos Mauricio Funes Cartagena,” he added.

The Public Prosecutor affirmed that one of the most important findings that they adhered to in the accusation was that the former officials received monthly and cash funds from the Special Secretariat of the Prime Minister’s Office in turn, without being covered by their nominal salary. “These sums were received outside the law,” the prosecutor added in the case.

PHOTOS: This is how they took former FMLN officials to court

For his part, Jose Emilio Gonzalez Castro, Violeta Menjivar’s lead attorney and legal officer for the rest of the captured ex-officials, said they would wait for the entire application to be reviewed, to determine whether the three crimes imposed by the Public Prosecutor’s Office under the ruling. The party speaks of applicability in each of the accused’s cases.

“We do not know how many pages this requirement includes. We know there are about five boxes,” Gonzalez Castro said, adding that he would request alternative measures for Violetta Menjivar due to her health, without specifying details in this regard.

It was known that the former Minister of Health would be represented by four lawyers.

Erlinda Hendal and Violeta Menjevar at the time of their referral to court. Photo EDH/Lycet Limus

Outside the courts, members of the Farabundo Marti National Liberation Front and its fighters protested the arrests. The protests were joined by figures such as Representative Annabelle Belloso, leaders Lorena Peña, Nydia Diaz, Shafik Handal, Karina Sosa, Yancy Urbina, Oscar Ortiz, and others.

Annabelle Peloso, the current FMLN MP in the legislature, said the arrest of the former officials is a “deprivation of liberty” and declared: “We have fallen behind in terms of law, institutions and, above all, the democratic process.” In addition, he described Najib Boukil’s government as a dictatorship.

He said the actions of last Thursday, when former FMLN officials were arrested, were unprecedented in the past 30 years and were carried out outside the framework of the law. Peloso denounced “they are political prisoners, political prisoners” and demanded their release.

The deputy also ruled that the trust in the institutions conducting the investigation in this case is invalid, and said that due legal procedures cannot be developed if they are by orders of the executive authority.

Nydia Diaz, a former MP and signatory to the peace accords, said these arrests are part of the measures that seek to dismantle the democratic program agreed upon with the signing of the peace agreement. “It’s a setback because it goes beyond institutionalization, legality, the constitution and people’s basic rights,” Diaz said outside the judicial center.

The historical leader of the FMLN said that the concern is that anyone who thinks or thinks differently from government authorities is exposed to the enemy and is persecuted by the institutions controlled by the ruling party.

“This cannot be allowed in the country, we have built a system of liberties, a system in which right must prevail, and now we see that it is all dismantled,” Diaz said.

For his part, the President of Axion Ciudadana, Humberto Sainz, noted that the state authorities had committed actions that would lead to the arrests of former FMLN officials, and that the principle of presumption of innocence was not respected.

Sainz explained that “justice should be sought and not public cynicism,” and he also clarified that “what is to be sought is justice, without a doubt, but justice does not mean that acts of insult to people must be done, and that the authorities have lent themselves to those degrading acts which It sends a negative message which does not contribute to respecting the principle of the presumption of innocence.”

Similarly, the Foundation for Law Enforcement Studies (Fespad), through a statement, called the arrest of former officials an “abuse of power.”

In this sense, he considered that the arrests placed El Salvador in the context of the 1970s and 1980s, “a time when respect for civil rights was much less than an aspiration,” he said.

The accusation against former officials and members of the Farabundo Marti National Liberation Front, the party from which incumbent President Najib Boukil was expelled, was filed before the Second Peace Court in San Salvador.

According to the attorney general imposed by the ruling party, Rodolfo Delgado, the arrests are the result of investigations that began in 2019 in the case of Mauricio Funes, who was linked to acts of illicit enrichment by extracting up to $350 million in public funds. And that he is currently a fugitive and took refuge under the regime of Daniel Ortega.