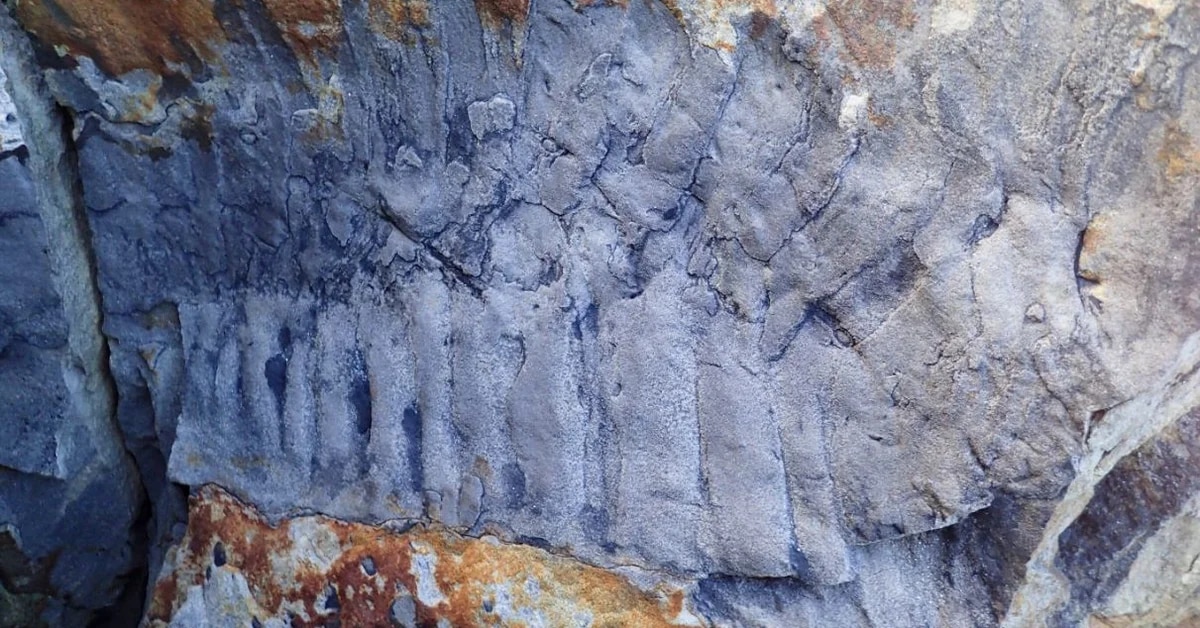 12-21-2021 Fossilized section of the giant millipede Arthropleura, found in sandstone rocks in northern England. Research and Technology Policy No Daves

The largest fossil of a giant millipede, the size of a car, has been discovered on a beach in northern England.

The fossil, the remains of a creature called Arthropleura, dates back to the Carboniferous period, about 326 million years ago, more than 100 million years before the age of the dinosaurs. The fossil reveals that Arthropleura was the largest known invertebrate animal of all time, and larger than the ancient sea scorpions that held the previous record.

The specimen was found on Northumberland Beach about 40 miles north of Newcastle, and it is made up of multiple parts of articulated exoskeletons, much like the shape of modern millipedes. It is only the third fossil of its kind ever found. It is also the oldest and largest: the part is about 75 centimeters long, while the original creature is estimated to be about 2.7 meters long and weigh about 50 kilograms. The results were published in the Journal of the Geological Society.

The fossil was discovered in January 2018 in a large block of sandstone that fell from a cliff on Howick Bay Beach in Northumberland. “It was a serendipitous discovery,” said Dr Neil Davies from the Department of Earth Sciences at Cambridge, lead author of the research paper. “By the way the boulder fell, it split and the fossil came out perfectly, which a former PhD student happened to have seen as he passed.”

See also  “Oumuamua teaches us not to send bodies into space, only minds.”

In contrast to the cool, humid climate associated with the region today, Northumberland had a more tropical climate in the Carboniferous period, when Britain was close to the equator. Early invertebrates and amphibians lived on vegetation scattered around a series of streams and rivers. The specimen identified by the researchers was found in a fossilized river channel: it is likely that part of the exoskeleton of arthropods was filled with sand, which preserved them for hundreds of millions of years.

The fossil was excavated in May 2018 with permission from Natural England and the owners of Howick Estate. “It was an incredibly exciting find, but the fossil is so big that it took four of us to carry it to the cliff,” Davies said.

The fossil has been returned to Cambridge so that it can be examined in detail. It was compared with all previous records and revealed new information about the habitat and evolution of the animal. It can be seen that the animal was found only in places that were previously located at the equator, such as Great Britain during the Carboniferous period. Previous reconstructions indicated that the animal lived in coal swamps, but this specimen showed that Arthropleura prefers open woodland habitats near the coast.

There are only two other known species of Arthropleura fossils, both from Germany, and both much smaller than the new specimen. Although this is the largest fossil skeleton ever found, there is still a lot to learn about these creatures. “It’s rare to find these giant millipede fossils, because once they’re dead their bodies tend to disintegrate, so it’s likely that the fossil was a wet shell that the animal dropped as it grew,” Davies said. “We haven’t found a fossilized head yet, so it’s hard to know everything about it.”

Arthropleura’s large size has previously been attributed to a peak of atmospheric oxygen during the late Carboniferous and Permian periods, but because the new fossil comes from rocks deposited before this peak, it shows that oxygen cannot be the only explanation.

Researchers believe that to reach this large size, Arthropleura must have had a diet rich in nutrients. “While we can’t know for sure what they ate, there were many nutritious nuts and seeds available in the litter at the time, and they were probably predators feeding on other invertebrates and even small vertebrates like amphibians,” Davies said. ..

Arthropleura fauna crawled around the Earth’s equatorial region for 45 million years, before becoming extinct during the Permian period. The cause of their extinction is uncertain, but it may be due to global warming making the climate too dry to survive, or to the emergence of reptiles, which outnumbered them in terms of food and soon took over the same habitat.