There is no tourism in Bethlehem despite its restored treasures 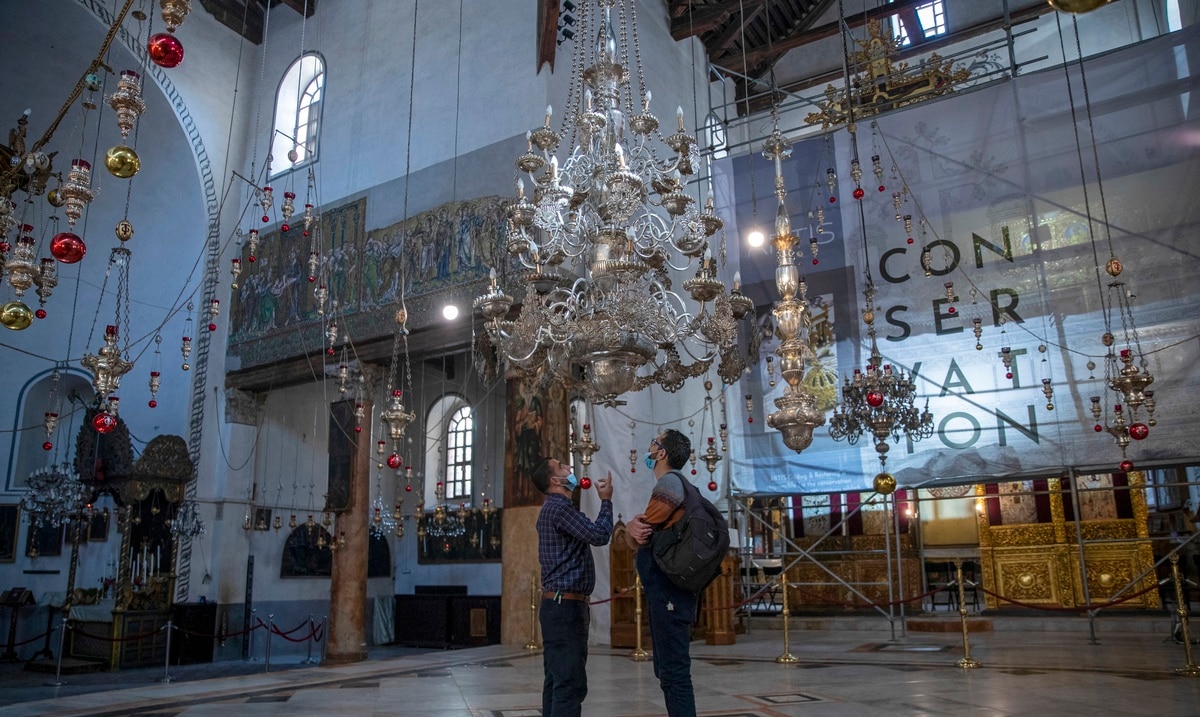 Bethlehem, West Bank – When there is a little more than a month Christmas, restorers are returning its golden glory to a gigantic wooden screen—once black by the smoke generated by millions of parish candles—in the Basilica of the Nativity, built on the site where many believe Jesus was born. However, very few visitors are expected in the upcoming Christmas season.

The biblical nativity scene has had many problems since the start of the pandemic nearly two years ago. Usually, Christmas is the peak season for tourism in the city located in the occupied West Bank Israel. Before the pandemic, thousands of pilgrims and tourists from all over the world visited the church and the adjacent Nativity Square.

Israel reopened its borders to vaccinated tourists this month, but relatively few are expected to travel to Bethlehem in the Christmas season, not close to the record for the year before the pandemic. Most tourists who visit Bethlehem travel to Israel, as there is no airport in the West Bank.

Many hotels in Bethlehem closed their doors and shopkeepers struggled to survive. Aladdin Sobh, whose shop is located next to Manger Square, said he is only opening its doors to air the building.

“It’s almost Christmas and there’s no one around. Imagine that,” he said, looking at the few passersby hoping to see a foreigner looking for a souvenir. “For two years, no work. It’s like dying slowly.”

While the pandemic has hit the booming tourism branch of the Holy Land for Israelis and Palestinians alike, for a city that relies heavily on tourism, the impact has been particularly severe. Israel, the main gateway to foreign tourists, has barred most foreign visitors for the past year and a half, before reopening this month.

Only 30,000 tourists entered Israel in the first half of November, compared to 421,000 tourists in November 2019, according to the Interior Ministry.

The Palestinian Autonomy, which administers the independent enclaves in the West Bank, has provided only limited support, in the form of tax breaks and training programs for hotel owners, tour operators and guides, said Majed Ishaq, director of marketing at the Palestinian Tourism Education Ministry. He said that the ministry is launching a campaign to encourage Palestinian citizens of Israel to visit Bethlehem and other sites in the West Bank during the Christmas season. He added that he expected the number of foreign tourists to be between 10% and 20% of the pre-pandemic figures.

Others are not very optimistic.

“I don’t think tourism will return any time soon,” said Fadi Kattan, a Palestinian chef and hotel owner in the Old City of Bethlehem. The pandemic forced him to close the Hosh guesthouse in Syria in March 2020 and had to lay off his staff.

He said it was neither financially nor practically feasible to reopen before Christmas, especially in light of a new wave of coronavirus infections in Europe. He added that it would take years for Bethlehem’s economy to recover from the “combined impact of two years” of the pandemic, from the hotels and restaurants to the farmers, shopkeepers and laundries who depend on their businesses.

“To reopen safely we have to see that there are long-term possibilities,” he said.

On a recent day in the Basilica of the Nativity, Bethlehem’s most precious pearl, a lonely group of Italian tourists entered the 6th-century church that in the years before COVID-19 had a long line in front of the door. Behind them, several municipal officials began lighting Christmas lights in Manger Square.

The temple has undergone a $1 million renovation since 2013 organized by a Palestinian presidential committee. He restored the gilded mosaics and marble floors to their initial glory, as well as carried out major structural repairs to the site, a UNESCO World Heritage Site and one of the oldest churches in Christendom.

Mazen Karam, director of the Bethlehem Foundation for Development, the group responsible for some of the church’s restoration work, said there was still work to be done. The project has already cost $17 million, but Karam said another $2 million is needed to restore church tiles and install firefighting and air conditioning systems.

A separate project by the Greek Orthodox Church to restore the iconostasis – an 18th-century wooden section separating the sanctuary from the building’s nave – has been postponed due to the pandemic, but is now nearing completion after three years of hard work.

“It was quite a challenge,” said Saki Papadopoulos, a wood maker working with Greek restoration firm Artis, which is responsible for the project.

But a Greek Orthodox priest, Issa Snowy, is feeling optimistic ahead of the Christmas season.

“Thank God, we see day by day more groups arriving in Bethlehem – they don’t stay in Bethlehem, maybe just to visit – but it’s a good sign,” he said, standing on the church’s marble floor. “Bethlehem without tourists, without people visiting Bethlehem, is nothing.”