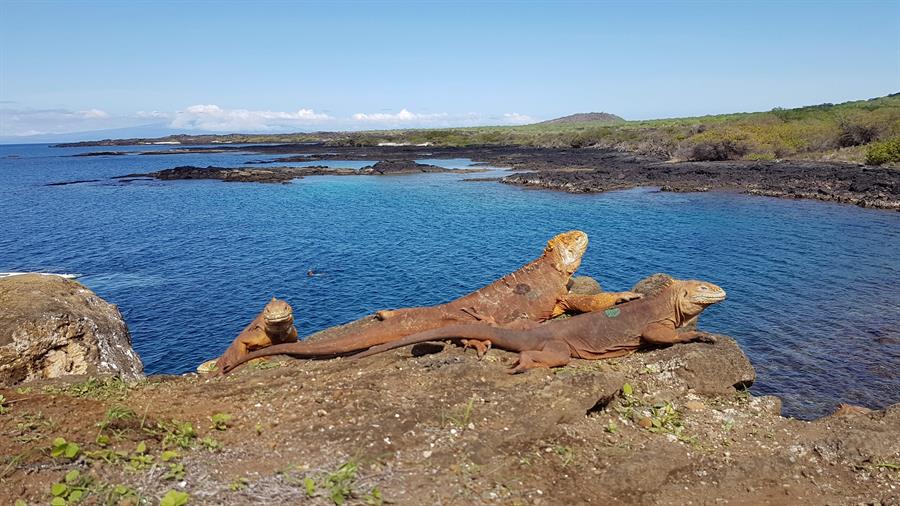 These reptiles, which can be up to 1 meter in length, will be observed in the release area and their adaptation to their new habitat can be assessed.

Technicians from the Galapagos National Park in Ecuador have reintroduced 461 iguanas on the island of Santiago, from another in the Ecuadorian archipelago, with the aim of returning these reptiles to their extinct habitat.

The project for the ecological restoration of the Galapagueñas iguanas, belonging to the Conolophus subcristatus, began about 20 years ago on the island of Santiago.

It was developed in parallel with the eradication of predatory species such as feral pigs, donkeys and goats, which feed on all kinds of plants, and according to specialists, the habitat of the fauna endemic to the Galapagos has changed.

It may interest you: The backed sea lion on the Salvadoran coast suffers from “infectious bronchitis”

A first batch of specimens was introduced in January 2019 on the island and their adaptation has benefited the ecosystem where Darwin’s finches also live, a colony of seals, sea lions and flamingos, among other native species.

The terrestrial iguana released this time in Santiago has been seized on the northern island of Seymour.

The director of the Galapagos National Park, Danny Rueda, explained that herbivores, since they eat aloe vera leaves, fruits, thorns and flowers, have a seed dispersal function within the ecosystem and are able to restore the island’s environmental integrity.

“The goal of reintroducing iguana to Santiago Island is to return these reptiles that became extinct more than 200 years ago into their natural ecosystems,” added the director of Galapagos National Park. Photo: EDH / EFE

The Ecuadorian Ministry of Environment and Water has determined that environmental park rangers have been involved in the operation, responsible for catching reptiles, and it is distinctive because it is yellow in their bags. The goal is to maintain your mood to avoid stress over the species.

A specialist, Jean-Pierre Cadena, confirmed that it is an accurate and difficult to manipulate species.

“We are trying to ensure that the species do not feel threatened, with biosecurity measures, so that the animal does not experience a lot of stress at the time of its capture,” he said.

Prior to their release on the island of Santiago, 461 iguanas underwent a quarantine and pro forma data recording process that included physical examination, deworming, and labeling using an identification chip.

In this way, these reptiles, which can reach a height of 1 meter, will be observed by zoo keepers in the release area and their adaptation to their new habitat can be assessed.

National Park technicians hope its establishment will be fruitful, after checking at the end of 2020 during monitoring work for the first released specimens, juvenile specimens, burrows and potential nesting areas – between one and twenty eggs -, plus there is a check on the availability of your food.

Read also: Anger in the networks because of a man who molested an elephant on Metallio Beach

Management measures implemented in these islands, especially with regard to controlling and eliminating introduced species such as rodents in North Seymour (2019) and pigs, donkeys and goats in Santiago (2002 and 2006), have allowed wild iguana populations in these unique ecosystems of the island remain healthy.

The Galapagos Islands, designated in 1978 as a Natural World Heritage Site by UNESCO for the formation of a unique land and marine ecosystem in the world, are located about 1,000 kilometers from the Ecuadorian continental coast.