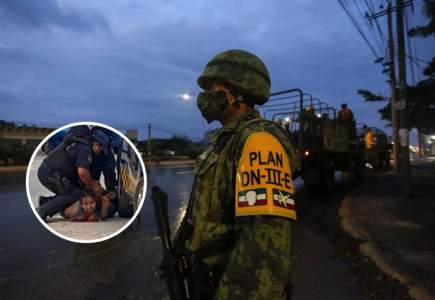 Unidentified people raided a house Journalist Francisco Canolle, Who was reported two weeks ago about the murder at the hands of the Salvadoran police Victoria Esperanza Salazar In Tulum, in the Mexican Caribbean, the organization denounced Article 19.

The Freedom of the Press Organization reported after contacting Canul: “On arrival at his home, he discovered the theft of computers and hard drives, in addition to personal belongings and various funds.”

The reporter is of Mayan originShe works for various local media such as Noti Tulum Gate, Channel 10, Quequi Quintana Roo and QFM Radio.

Read here: “He did not deserve to die”: a Salvadoran mother killed by police in Mexico

According to Cannul on Article 19, the entrance door and many of his furniture in Tulum were “damaged” and “his stationery was destroyed and disposed of.”

He said he had to call the local police twice to report the events, and the patrol arrived at his home an hour and a half later.

He considered it “not an ordinary robbery” because it was “fierce,” and claimed that he had found “a trace that might be from a policeman’s shoes” and doubted that they were “looking for something else.”

Article 19 highlights that these events occurred after the news of Victoria, a Salvadoran immigrant, was killed by the municipal police on March 27, as Francisco was one of the first journalists to announce these events.

What’s more: Buckili demands justice from Mexico for the murder of a Salvadoran woman

The organization said, “This fact is very worrying because the raid on the journalist’s home has a curbing effect on those who exercise their right to freedom of expression and access to information.”

Victoria Esperanza, 36, a resident of Mexico with a humanitarian visa since 2018, was subjected to subjugation by the four policemen in Tulum, who broke two paragraphs.

The local agents, three men and a woman, were arrested for femicide.

The death of Salazar, recorded on video, sparked outrage in both countries and sparked protests by international organizations and groups accusing Mexican security forces of racism and misogyny, in addition to allegations by Salvadoran President Neb Bokil.