The FIFA World Cup is the most important tournament in the world of men’s football at the level of national teams, which has been held every four years since 1930, except for 1942 and 1946 where it could not be played due to World War Two and its consequences.

The World Cup currently has two main stages, a qualifying process in which around 200 national teams participate and a final phase that is done every 4 years in a venue defined in advance.

An interesting fact about this tournament is that the official ball is usually manufactured by the German company Adidas.

The history of the World Cup

This competition has been held on 21 occasions, where 8 teams have been able to lift the cup and consecrate themselves as the maximum world champions in each edition of this tournament, and you can learn the latest news about international competitions here.

The championship involves 32 teams during a period close to a month.

Brazil is the most successful team in the history of the World Cup, as it is the only one so far to have participated in all the world cups and have the record of most World Championships won with five titles and the record in the FIFA Confederations Cup with four titles.

It has been the only team in the world to obtain 12 times the FIFA Team of the Year Award, which distinguishes the best selected of the FIFA ranking. They also obtained 4 times the FIFA Fair Play Award for its fair play, 1 Award for the most attractive team by FIFA and 1 Prince of Asturias Award for Sports.

When is the next World Cup?

The twenty-second edition of the world cup will be held in Qatar in 2022 from November 21 to December 18 of that year.

This will be the third time that a world cup is played on the Asian continent, after the Cup of Korea and Japan in 2002 and Russia 2018.

A great debut in the first edition

The first world cup was played in Uruguay in 1930 because FIFA decided to hand over the organization of the tournament to this country in commemoration of the centenary of the oath of the Constitution, among other reasons.

The tournament involved 13 national teams, 12 invited plus the organizer, divided into 4 groups: 3 groups of 3 teams and a group of 4 teams.

The first two games in the history of the World Cup took place simultaneously on July 13, in which the United States beat Belgium 3-0,  while France beat Mexico 4-1. 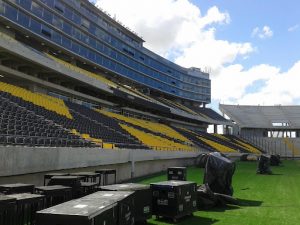 In this first celebration of the cup the teams of Argentina, United States, Uruguay and Yugoslavia were able to enter the semifinals after winning in their respective group stages and managing to be pioneers in the victories of the first editions of the cup.

In the semi finals Argentina and the United States met in the first match, where the first half ended 1-0 with a goal from Monti for the argentines and the americans did not stand out so much in the second half and were finally defeated 6-1.

In the second semi-final the hosts faced Yugoslavia, who managed to get ahead on the scoreboard thanks to a goal from Vujadinović, but nevertheless, Uruguay reacted and managed to win 6-1 with a hat-trick from José Pedro Cea. 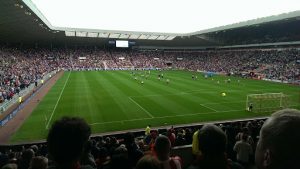 In the final the host Uruguay beat Argentina 4 to 2 in front of an audience of 68,000 spectators.

This first world cup and its first winner, Uruguay, marked the way to what today is one of the most important international sports championships in the world that attracts a great amount of public.

The competition has helped to develop the sporting potential of all countries in the world, making every new edition of the tournament to have much more exciting games and the level and difficulty becomes worthy of admiration.