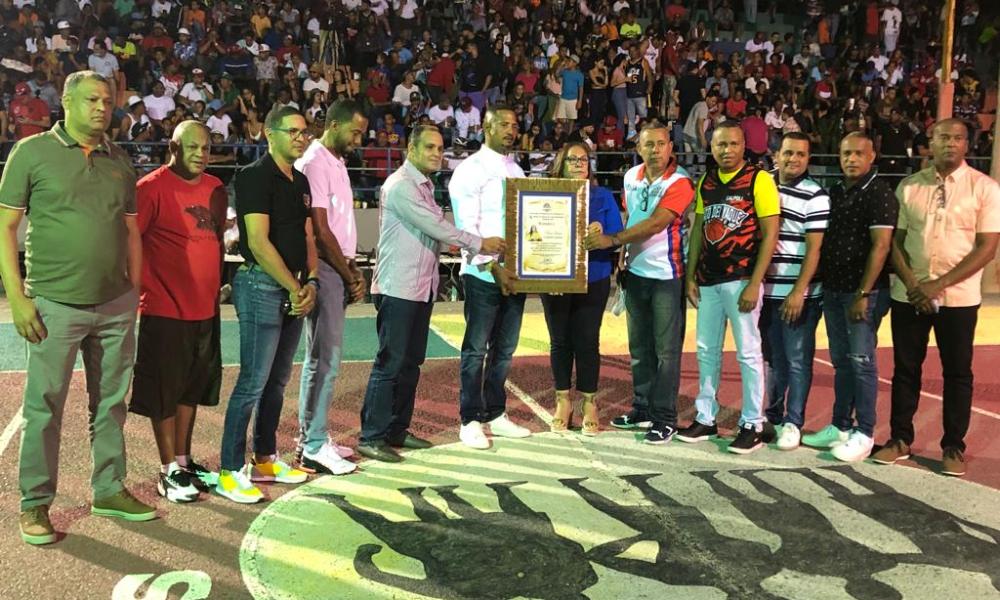 The Governor of Santiago receives a plaque of appreciation for her contributions to the Inter-Municipal Basketball Tournament / External resource.

In this way, Cienfuegos took the final to Game Five of the decision, scheduled for Wednesday at 8:00 p.m. at the Gran Arena del Cibao by Doctor Oscar Jubiara.

The visitors from Hato del Yaque dominated the first quarter 24-14, but then Professor Victor Peña’s changing strategies started to pay off and Winston Cepeda’s pupils and homeowners won the second half 30-23 to go into the first-half break with the score 45-44, still in favor Hato del Yaque.

After that break, the home owners dominated the third quarter 21-16, to start the last organizational quarter with a 4-point advantage (65-61), and also managed to win that period 25-19, to finally announce that the important win 90 -80 and impose a decisive fifth game .

Strengthening the under-22 team, Eddie Cruz (Edito) led the players who came from the bench with 22 points, his team’s top scorer in the match, the other players who contributed from the bench are Juan Jose Leon with 14 units, Jesus Fernandez 13 points and Jeremy Castillo With 5 points, the latter was the key to the defense as he fended off many opponents and grabbed important rebounds.

For Hato del Yaqui, the trident Edwin Espinal, Ibanuski Ortiz and Frandi Martinez (Bumba) scored 69 points out of 80 scored by his team, Espinal led the attack with 28 points, followed by Ortiz with 21 units and Martinez 20 units.

Before the start of the second half of the meeting, the Executive Committee of ABASACA presented a plaque of appreciation to Governor Rosa Santos, for her great contributions to society and especially to the sporting Santiago family.

The delivery was delivered by ABASACA President José Luís Aracena, accompanied by other executives of the entity and several members of the press.

Following Rosa Santos’ admission, ABASACA Executive Committee accompanied Marcos Alvarez, businessman, to carry out a kick of honor for that fourth game of the Grand Final of the Santiago International Basketball Tournament.

The meeting took place on Sunday evening in the Hermanos Alfredo Morales Square in the Monte Bonito sector in Cienfuegos.

The event is organized by the Santiago Basketball Association (ABASACA), and is dedicated to the General Manager of the Municipal League, Victor Daza, as an option for the Proindustry Cup.