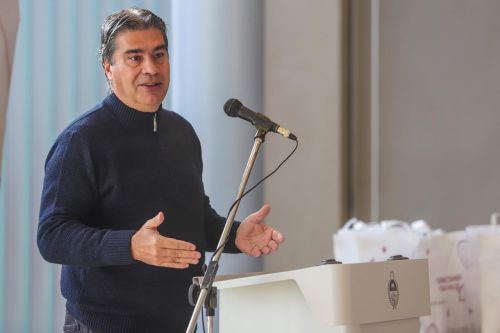 Teams will allow the use of the Argentine Basketball Association’s GES virtual platform. In addition, the men’s and women’s basketball competitions for the APR 2022 Finals will be televised via Chaco TV and connectivity via Ecom will be expanded to clubs across the province.

Governor Jorge Kapitanic, with the Resistance Basketball Association and ECOM, provided tablets, guaranteed connectivity and television broadcasts of regional basketball. “By 2023 I have proposed to the institutions to work on all the necessary reforms in order for the clubs to be in optimal communication conditions,” the president said.

Connected Clubs is an initiative set up between the government, the Resistance Basketball Association and ECOM that seeks to provide greater infrastructure for clubs in the county. As part of the programme, tablets were handed over to use the Argentine Basketball Association (CAB)’s virtual GES platform and Chaco TV confirmed the broadcast of the APR 2022 Final, for males and females, as well as internet connectivity.

Kapetanic stressed the importance of ensuring that the Resistance Association, which has 10 institutions and 5,600 players, is part of this constitution along with public television in broadcasting matches. “This is the hierarchy of Chaco sport. He emphasized that the competition is improving with the infrastructure, the players, the technicians and the system that makes up a virtuous circle like the one we run.”

The strategy is part of the infrastructure investment plan, which will amount to 6,200 million pesos until 2023. “This comes from Chaqueña Lottery and we have optimized resources with transparency, control and oversight, which are due to sports, culture and tourism and have a multiplier effect on the development of economic and social activity.

“It is from the company that we accompany in transporting matches, in connecting technological devices and also in connecting to the Internet, making a set of digital integration of clubs, in this case basketball clubs,” Velasquez noted. : “The Sports Institute organizes us and gives us priorities so that we can make contacts and ratify them, and then we will have to maintain the internet in the club.”

For his part, Ocampo stressed that it is “very positive” to compete with better technology support than that used to compete on the same terms as it competes at the federal level. “The format that we’ve been working on within the clubs is not just to get connectivity, but also to have digital support that allows us to load players, coordinate passes and have a level of control in terms of training, so we seem to be a very important programme.”

While Hindu club representative, Luis Sirqueira, emphasized that it is a very important tool for all clubs, “and being a pioneer here in what is ABR, in using this technology in every tournament, management speaks very well,” he said, “We are adapting to the time we live in.” At the state and basketball level, and that the government supports it clearly speaks volumes about the support for sports that the county governor has always had.”