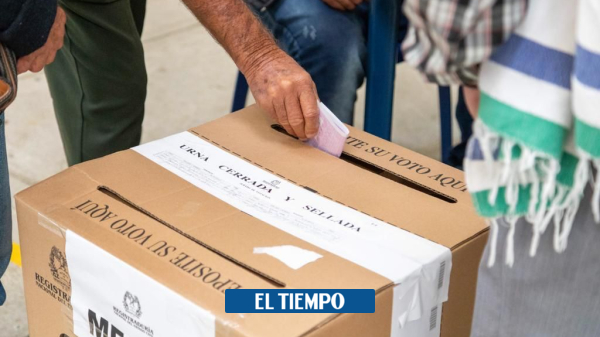 With polls open Sunday in New Zealand, the second presidential round has officially opened overseas, according to Registrar Alexander Vega.

(You may be interested: Most polls point to a heart attack in the presidential second round)

outside the national territory Colombians will have 250 polling stations enabled in 67 countries, With more than 1,300 voting tables, more than 972 thousand people have been able to vote as of today

In the same way, Vega noted that six polling stations have been set up at the border for citizens living in Venezuela, located in La Guajira, Norte de Santander, Arauca and Guenia.

as per schedule, New Zealand is the first country where voting is open.

Namely, with the participation of the Deputy Secretary of State, Francisco Echeveri; National Registrar Alexander Vega; Deputy Minister for Political Relations of the Ministry of the Interior, Maria Paula Suárez; Secretary-General of the Ministry of Foreign Affairs, Luis Gabriel Fernandez, and Director of Immigration Affairs, Ambassador Fulvia Benavides, set an observation table for the electoral process abroad on Sunday in the Palacio de San Carlos.

(Watch the coverage of the second presidential round here)

The first polling station to open, due to the time zone, was Auckland in New Zealand, where Consul Juliana Pongelope gave a piece of calm by a completely natural start to the day. He also stated that 1,179 Colombians are eligible to vote in this position and another 223 in Wellington.

The first to exercise the right to vote in this second presidential round were Carmenza Aroyev and Viviana Márquez.

(also: The government announces the drought law and the closure of borders for the second round)

“This is a very positive part. We started voting abroad for the second presidential round. The Government, the Registry, the Ministry of the Interior and the Ministry of Foreign Affairs shall work together, in coordination, so that all Colombians who are part of the electoral census can participate by voting in the consular offices and in locations created for this purpose. the purpose. Francisco Echeverry, Deputy Minister of Foreign Affairs of Colombia.