Heaven can wait, not the Pope’s call 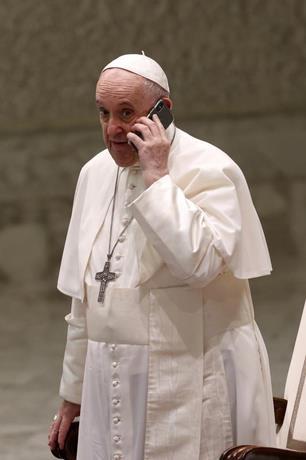 Maybe heaven is waiting, not a phone call with the Pope. Deviating from protocol, Pope Francis picked up a cell phone handed to him by an aide as he stood center stage at the Vatican during his weekly public audience on Wednesday.

Francisco, who had just given the blessing, spoke excitedly for a few minutes to whoever was on the other end of the line.

The Pope gestured with one hand as if his interlocutor could see him while holding the device with the other hand over his left ear. He seemed to be explaining something to someone and wouldn’t stop talking.

He moved his right hand twice as if he was signing something.

The Vatican did not immediately respond to the question of why the Pope took the call.

Usually, after the blessing, the Pope mingles with people and greets some people affectionately. But, leaving the routine again, Francisco suddenly changed direction while talking to an attendee and instead of going down the steps of the podium to greet the faithful, he turned toward the locked exit door of the stage.

The aide, then the Pope, signaled for the people to wait. The attendant opened the door and the Pope left the podium. After a few minutes, Francisco returns and descends the marble stairs to mingle with people who want to shake hands with him or take a selfie with him.

Cuba can generate 1,100 megawatts of electricity from wind › Science › Granma