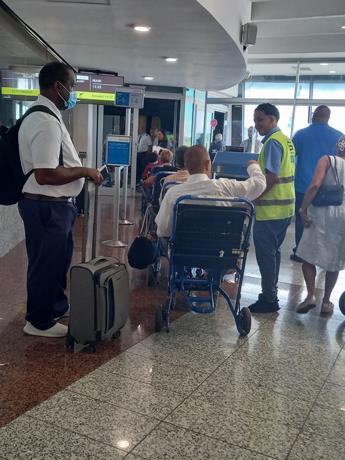 The increasing demand for wheelchair service by passengers at Las America International Airport has become a major concern for airlines and terminal flight operations, causing disruptions in boarding areas, and flight departure delays due to painful start-up operations for passengers.

It is very common to see passengers on different flights requesting the use of a chair to access the services of different airlines. The facility gives them the privilege of not standing in immigration queues and the ability to board the plane before other regular travelers.
Although the demand for the service has increased in recent years, it was only after the outbreak of the Covid-19 pandemic that people’s demand to receive service increased significantly at the airport.

According to the data provided that emerges from a report prepared by the airport’s Flight Operations Department, an average of 500 people request this facility daily to board their flight, which will affect operations.

Before the coronavirus, the average number of people who requested the service to move from the line counter area to the boarding area averaged 150-200 passengers per day overall.

Now instead, according to the same data in the report, that number has skyrocketed with more than 500 passengers a day claiming to be carried in wheelchairs. Passenger congestion has become a concern for the airport’s aviation operations authorities and for the airlines themselves.

The fact is that one flight departs with 35-40 people assembled in the boarding area, in wheelchairs and hinders and creates difficulties for boarding operations for other passengers who do not use the service. But in addition, according to the airline, the situation is causing delays in the take-off of some flights.

Added to this component is the situation that airlines have gone through for a long time after the epidemic due to the lack of people, such as pilots, flight attendants and flight attendants, a reason that causes delays in departure and cancellation of operations in the country and abroad.

The number of passengers who booked the service of using a wheelchair upon departure is no longer limited to the disabled and the elderly, but also to young people who do not show any physical handicap, but want to free themselves from immigration procedures.

This data proves that if we multiply the 500 passengers departing per day by 30 days, it will result in 15,000 passengers per month departing on regular flights that go primarily to North American territory.

30 or 40 people
In the passenger waiting area inside the airport, 35-40 people can be seen sitting in wheelchairs, waiting for the right moment to board, as a result of the increase in this service.