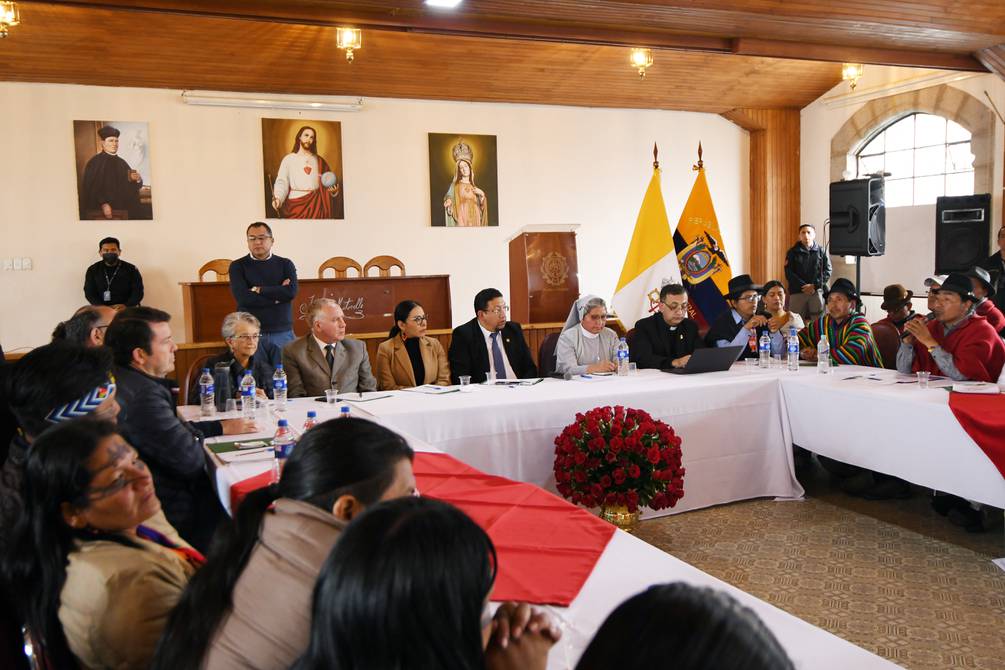 The first day of dialogue between the government and organizations promoting the national strike, headed by the Confederation of Indigenous Nationalities of Ecuador (Kone), ended with some progress, after 15 days of mobilization, but sensitive issues remained on the opponents’ table. the parties.

The meeting took place on Monday in the facilities of Liceo Matovelle, next to the Basilica del Voto Nacional, in downtown Quito. The exchange of norms between the aboriginal leaders of Conny, Fen, Venusin, and Convinia with government representatives – President Guillermo Laso did not participate – lasted about six hours, in a crowded hall. Meanwhile, outside the building were dozens of protesters supporting the strike.

As guarantors of the meeting were the highest authorities of the National Assembly, the Ombudsman, the National Electoral Council (CNE), as well as delegates from the Catholic Church and the Ecumenical Commission for Human Rights (Cedhu).

Although the indigenous movement was radical in its position of not withdrawing from Quito, maintaining pragmatic measures, while The government does not fully accept the 10 points you are asking forDuring the dialogue that took place on Monday, the Speaker of the House of Representatives, Leonidas Iza, announced that if two main issues were accepted and technical tables for the others were to be installed, the national strike would end.

The first of these is the further reduction in fuel prices, since, according to Konai, The 10-cent reduction set by President Guillermo Laso will not be enough To reduce the prices of food products or agricultural production inputs.

In this sense, the local organizations’ proposal is to create $1.50 per gallon for diesel and $2.10 for Extra and Ecopa gasoline; Go ahead and guide the support system to the sectors that need it.

The second fundamental issue to put an end to the paralysis that reaches 16 on Tuesday, is the repeal of the 95 decrees authorizing oil policy, and Resolution 151 related to mining exploitation.

The Executives took note and inquired of each to Carondelet about these specific requests, taking advantage of a 20-minute break in dialogue. Upon returning to the meeting, the decisions were communicated. However, this did not fully satisfy the indigenous leaders.

The Minister of Government, Francisco Jimenez, announced that Decree 95 would be repealed. In fact, he indicated that the document had already been drawn up, and that the signature of President Guillermo Lasso was missing in order for it to be official and enter into force.

With regard to Decree 151, the option proposed by the Executive is to reform, but not repeal, many of its articles. Mining activity standards will be incorporated.

Jiménez reported that a draft decree has been prepared by which the President of the Republic relinquishes the constitutional authority he has to allow, under exceptional circumstances, the extractive activities of non-renewable natural resources in protected areas and in areas declared intangible. In addition, the Ministry of Energy and Mines will be directed not to approve projects of new extractive activities in protected areas and intangible areas.

Similarly, the Minister announced that the instruction manual for prior consultation is under preparation.

What the government did not give up on is the further reduction of fuel prices. Jimenez said financial inflows have been made and that no mechanism has been found to increase the support that is currently in place. However, Carondelet is open to receiving a proposal from Indigenous sectors to determine the targeting requested by social organizations.

Indigenous leaders welcomed the repeal of Decree 95, but criticized the fact that other aspects had not been accepted and that responsibility for developing the targeting mechanism had been transferred to the Indigenous movement.

In this regard, Kony’s president, Leonidas Iza, said, “Such a thing is unacceptable.” That the state be responsible for this task, because the union and other groups do not have enough money to pay the costs of preparing the required studies.

And regarding Decree No. 151, he insisted on repealing this provision and not allowing mining activity in water feeding areas or in reserves or in the lands of peoples and nationalities.

The dialogue with the government ended around 10:00 pm, but before that, Isa proposed the removal of the Minister of the Interior, Patricio Carrillo, from his post; He also called for the release of detainees in the context of the protests and not to be prosecuted.

Talks will resume on Tuesday 27, at 09:00, to determine a solution to the sticking points, and the situation in the country in the coming days will depend on it. Indigenous leaders on Monday confirmed that the strike would continue until their requests were accepted. (YO)