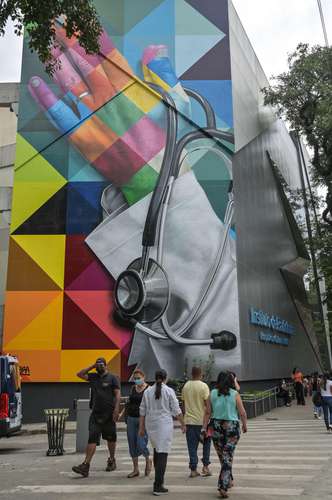 Sao Paulo. An image of praying hands with a dangling stethoscope covers a wall at Hospital de Clínicas de São Paulo, the latest in a series of health and science-inspired murals to have appeared during the COVID-19 pandemic.

Since the days when the Covid-19 virus has immersed itself in atypical silence, the city of 12 million has taken on new colors through its distinctive street art, but with themes that until then were foreign to it.

Its author, muralist Eduardo, says the engineering work at Hospital de Clínicas, the largest medical center in Latin America, “unifies science with faith, and shows that there is no contradiction between them, in the face of a very large movement of negation.” Cobra.

“It is very important at this time to send a message of faith and hope, so that people realize that they are not alone; Art has that role,” says the 47-year-old artist, a ubiquitous figure in the Open Air Museum in São Paulo.

“For us here every day, in the face of an epidemic, the tribute is emotional,” says Tado Costa, a 35-year-old physician.

In another mural, Priscilla Barbosa depicted a nurse with a hat and mask holding some flowers. This is a real character that grew out of a project called Flowers for Champions (Flowers for Champions) It originated in the United States, which distributed bouquets to workers in 2020.

“At a time when little was known about Covid, she had an aura of light, as someone capable of providing relief,” explains Barbosa, who has found a new source of inspiration in health professionals.

“It seemed important to me to contribute, and because I am not a doctor, I did so with the art in this mural: it was very interesting,” Grisolia says.