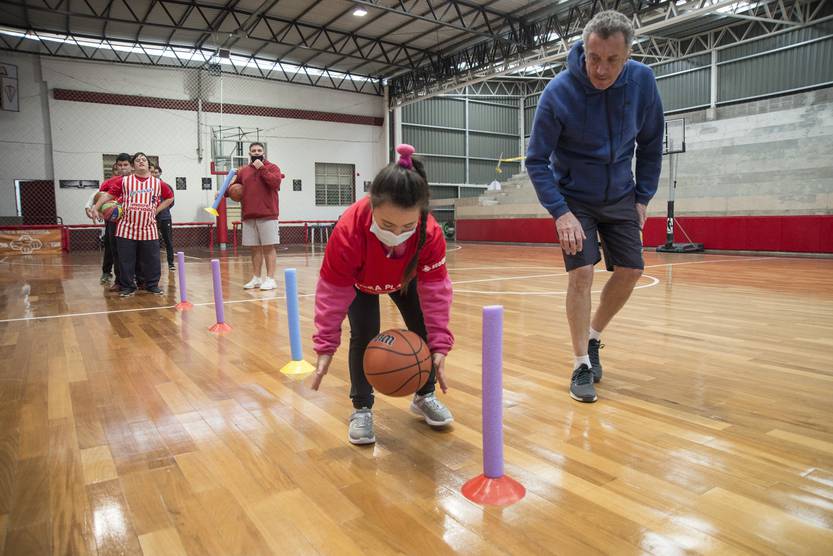 Sport, its exercise, practice and development should be fun for everyone. This need, which seems to find its space with the progress of humanity, in the Laranaga Club in Montevideo is a place where people with Down syndrome, autism spectrum disorder and disabilities play basketball.

At the Larrañaga Social Club, they are building air-conditioned pools, because the Larra Plateado team has been working there for four years.

The idea came from a group of volunteers who had seen modified basketball in other clubs and from there established a link with the Manos Unidas Center, the Dawn League of Uruguay (ADU) and other close friends of the club who decided to participate in this team.

Eugenia Perez is one of the assistants who has worked at Lara since last year. His father and brother – who play in one of Larrañaga’s teams with his cousins ​​- are so helpful and on weekends he had to supply them. It so happened that he fell in love with the activity and never left again. In addition, he is also interested because he has a relative with Down syndrome.

His role is to help follow the practice and realize who needs guidance, but he also goes because he enjoys it. “They give us a lot more than we give them,” he sees.

Those who do this activity are the coach and the collaborators, as well as other people who, weekend after weekend, come close to provide support to players who need special attention. They are currently working on drafting an official project to clarify this within the club and thus achieve greater spread, with the aim of being self-sufficient, as they have only a few sponsors.

In addition to the materials, the primary need is training. They need to take part in cases such as those organized by the Higher Institute of Physical Education, which proposes permanent training courses oriented in this subject for graduates, so that the club is a reference for a suitable sport. To generate income, they campaign to add more members for a T-shirt: the proceeds will be used to grow Silver Larra.

Ramiro Mazzola, the coach, was interested in seeing the practices of this class at Defensor Sporting. considers sports as essential for people with disabilities, and its main goal is the continued development of the practice; For that, little by little, he adds challenges to the players that make them develop their skills in a context of comfort. “From the little things, for example, Diego, one of the members, started to get scared and insecure, I passed the ball to him and he did not respond. Today he is running, and he is already integrated into the team. As a coach, I have to give importance to these sports issues. Although they come to enjoy This also adds to making them feel a part of it,” he explained claw.

But beyond athletic demands, Lara Silver’s main goal is integration. “The main thing is that they notice the changes themselves, not only do they learn to bite the ball, but they develop as a whole, from running to achieving skills that add to them, and they feel comfortable in the team, because it’s where they belong.”

With the exception of some clubs with groups with these characteristics, there are no spaces like this on a social level, so Larra also works to send a message to the community so that more instances like this are created. “It’s basic and enriching; we started with a lot of doubts and doubts and now we have this activity, which is another club activity and they enjoy it a lot, but we also learn all the time, trying our best from the little details. The fun is mutual,” Mazola said.

At the same time, the activity not only benefits the participants – both for a sense of belonging and for their physical well-being – but also enriches the rest of the club, “because it helps to understand and change the chip bit, the model” is over.

Today the team consists of about 30 players. For a while they were competing in a modified basketball league that they participated in alongside Defensor and Capurro, but the goal is different at the moment. They considered that they weren’t ready to play this league because, although it was fun, Lara’s goals went the other way, but they don’t rule out joining some competition in the future.

Because of the pandemic, they haven’t played for a while. On the way back, they showed the lack of activity that made them during that time. “They were so eager to get back, they needed it, not only for health, because they had a tendency to obesity and heart disease, but because they had no other cases of relationships,” explained Eugenia Perez.

“They need to be hugged and be together like everyone else. They feel part of that because in society they are excluded from many activities, but here they come in, they are all the same and treated the same way, and that adds up to them a lot.”

In turn, space is necessary for the family of players, because a person with an intellectual disability does not generate the same amount of income and has a high dependence on parents or guardians for many years, who bear the costs of specialists, educators and others. , because they need more care, and their caregivers find time to rest when they are in Lara. Parents can be seen chatting, mingling, and enjoying a moment to themselves. Larrañaga Club thought of them, too, and since this month they’ve been offering free gymnastics lessons to parents, at the same time as the Silver Team.

A place for everyone

The contribution is mutual. Mazulla feels that in other areas of his basketball business he has not found the satisfaction that being coach of Larra Plateado gives him, for many reasons. “Firstly, because they need it and they are very happy when training…Sometimes you get angry about something, or even the players of other teams, if they don’t score, they get frustrated; they do the opposite, just throwing them makes them happy, and they pass it on. So I leave happy, full. They teach me, because they know how to have fun without prejudice, they only give love; we must learn more from them.”

In the case of the collaborator, her participation in this team helped her define her profession. “I’m studying law, I didn’t know what to associate it with, and now I want to do something related to equality: have spaces adapt to everyone and we treat the same. They learn, they laugh all the time, they hug you, they tickle you, they are happy and they pass it on,” he said.

Larrañaga is an all-inclusive club open to all, just present a health card and you can now join. But they think from Lara that there is still much work to do to improve the social level, because there are no places for fun for them, whether from sports or not.

These shortcomings may be due to the fact that society is more accustomed to adapting, for example, people with mobility impairments, who are blind or who use a wheelchair. “There are ramps everywhere, but they are not used to dealing with intellectual disabilities, and they end up as isolation, and you have to make sure that it’s not a fashion, that there really is inclusion. We don’t want to convey pity, as a society we have advanced so much, but the paradigm needs to change. And they said from the club, we are trying to give this message that a lot of thinking needs to change.