NASA explains the appearance of holes in the sky. – Life sciences 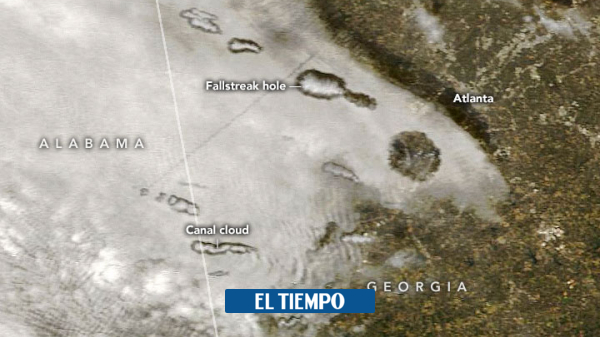 In early 2020, heart-shaped holes appeared in the clouds in the sky over Sweden. This phenomenon has been repeated in various cities in the United States in 2021.

If we looked at it from the ground, it might appear as if a portion of the cloud is falling from the sky. And according to NASA, this is what happens.

This phenomenon occurs in mid-level clouds composed of extremely cold water droplets; That is, the droplets remain liquid even when the temperature is below the typical freezing point of water (32 ° F or 0 ° C).

But even very cold drops have their limits. The additional cooling that occurs on aircraft wings, for example, can push droplets to a freezing point when an aircraft passes through cloud cover.

Ice crystals spawn more ice crystals as the cold drops continue to freeze. It eventually becomes heavy enough for ice crystals to fall from the sky, leaving a void in the cloud layer. Usually these fallen crystals are visible in the center of the holes.

Aircraft is an important factor in punched clouds. For this reason, it is no coincidence that the holes are located near airports.

With information from NASA.

– (The history of domestication of animals goes back 8,000 years in Central Asia)

(The brain of modern humans developed in Africa 1.7 million years ago)