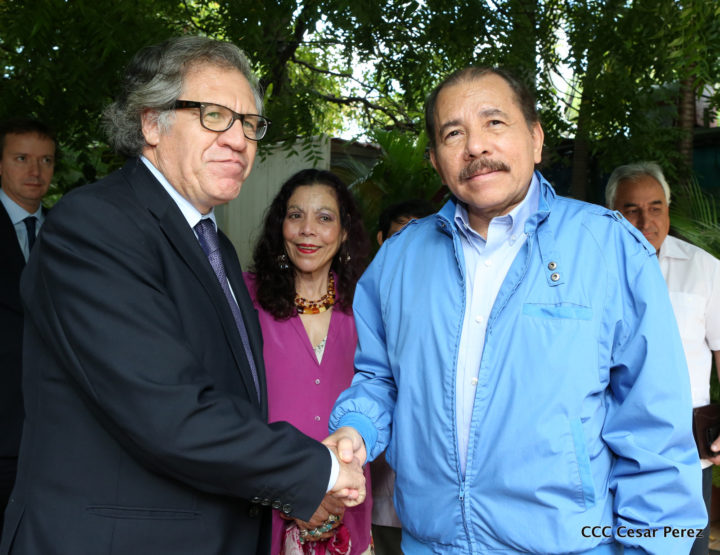 The Secretary-General of the Organization of American States, Luis Almagro, informed the President of the Permanent Council of the Organization, Jose Fialo, on Friday of the diplomatic efforts he had made so that the regime of Daniel Ortega and Rosario Murillo would allow the entry of a high-level mission into the country.

This task was entrusted to Almagro by the decision of the Permanent Council of the Organization of American States of December 8. However, Almagro said in his letter that he had received no response from Ortega Murillo’s regime, and demanded an extension of the term.

“In this sense I commit to inform the Permanent Council through you, Mr. President, that we have implemented the steps mandated through the relevant channels in order to obtain the results required in Resolution CP 1118 (2355/21) of December 8, 2021,” reads the the message.

“Since there was no definitive answer on this matter at the time of sending this letter, and given the current political circumstances and dates, I understand that it would be appropriate and appropriate to extend the deadline of December 17 (today) as a deadline, to be extended to mid-January (today). January) next to inform the Permanent Council of the final result of the administration, if there is agreement from the Governing Body on the basis of the necessary coordination that you understand to do.

The press had consulted with political analysts and insiders about the delay in announcing the outcome of these efforts, as the Secretary-General of the Organization of American States did not speak until early Friday night, and they speculated that the actions were most likely de Almagro. It did not have a positive result.

“I think we will know until very late (what happened). But it is more probable that he had failed attempts and the excuses were cleared to the OAS,” said Manuel Orozco, a political expert and analyst on Inter-American Dialogue in Washington.

International analyst and politician, Pedro Fonseca, agreed with Orozco: “I don’t think there has been any progress and the secretary should show it in his report, because this is also part of the record.”

Ortega government ignored or not?

On December 8, the Permanent Council of the Organization of American States by 25 votes to 1, against, with eight abstentions, on a resolution asserting that Nicaragua was in breach of its commitments to the Democratic Charter The Organization of American States asked the regime to accept a high-level mission to help lead the implementation of comprehensive electoral reforms.

Expert in international law and integration issues and professor at the University of Costa Rica (UCR), Carlos Murillo Zamora, expressed his opinion before Almagro’s letter was known that he could have requested some kind of extension, stating that “it already exists in the case of Nicaragua, there is no alternative”, because the dictatorship solidified.

“If you look at it from the perspective of the system, Ortega does not have to negotiate. “On January 10, he will claim that he has been elected and that he will have a new term for which he was elected in the elections, which he recognizes as valid, even though the rest of the international community does not,” Murillo Zamora said.

Fonseca noted that if Ortega’s response was negative and closed to measures adopted within the Permanent Council, that case would decide how to proceed, whether “if he places another call on the Government of Nicaragua, if he holds a special meeting or if they decide to take a tougher decision at once.” “.

You may be interested in: The deadline for the Secretary-General of the Organization of American States to submit a report on the negotiations with Nicaragua expires on Friday

“Although Ortega’s government has already decided to resign from the inter-American system, this resignation is still ineffective, and therefore, what is stated in the Democratic Charter is still valid, and this means that the Organization of American States can still suspend Nicaragua’s membership” . .

While Murillo Zamora believes that “what happens before January 10, 2022 is not of great importance, the key lies in what the governments of Latin America will do since that date, when they have to ignore (Ortega) government.”

He reiterated that “so far no one can ignore Ortega’s government, they do not know the result of the November 7 elections, but from January 10, when the new government’s term begins, they will have to ignore the government to be consistent. What they have done so far.”