“We’re back to live in our own space with our college theater.” 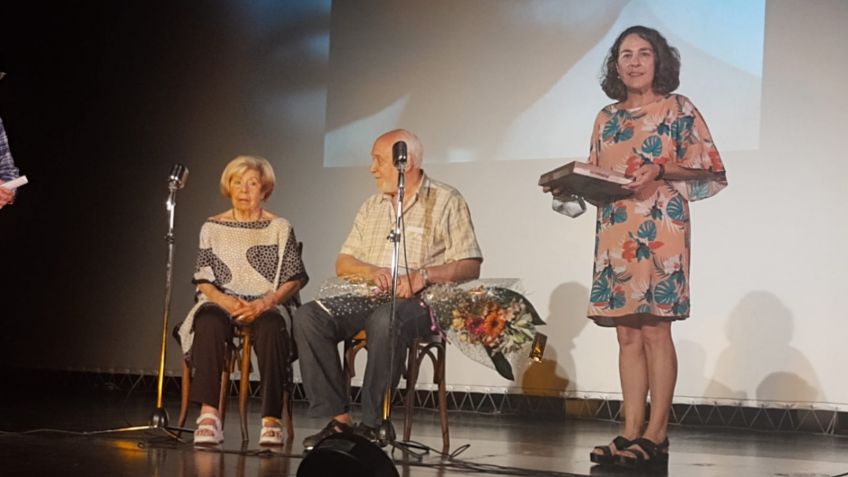 The program included the performance of the play “Regina Seles” directed by Roxana Aramburu and directed by Julia Lavatelli, and “Back to Fabrica”, theatrical performance by the Teatro La Fabrica Chamber and Student Center of the Faculty of Arts, in numbers made. Up to artists from college that included works developed in some chairs. Those making up the CEFA noted that “to be back in the ring is so satisfying, it’s already happening and makes us want to do more.”

The “Espacio Teatro” concluded with the presentation of “Ir vando” – chosen to represent the district at the National Theater Festival – by TOC, under the supervision of Javier Lester.

The proposal was also useful for announcing the new edition – Issue 16 – of “El Peldaño” – the Notebook of Theatrology, the journal of the Department of Theater of the College of Arts, an academic publication that publishes reflections on the theory and practice of theatrical work.

Silvio Torres and Agustina Gómez were the presenters: “El Peldaño” is a theatrical notebook, a journal dedicated to the study, research and publication of theatrical activities. In 20 years, this is the first time that we have been able, with great effort, to publish two annual issues, clearly speaking of the importance of the journal as a space for the dissemination of academic activities for those of us to whom we dedicate ourselves to research and extension in our College of Art.” Theatre, to have a space to comment on their experiences, not only with the aim of speaking and communicating but also to generate a space to reflect on their educational and artistic experiences, always linked to performance and practice”, they stressed.

To the teacher, with much love

One of the most emotional moments of the day was honoring actress and teacher Betty Eletta, who retired after 40 years in the academic theater community. Carlos Catalano – founder of the Escuela Superior de Teatro – was responsible for the opening words of the homage. “I met Betty in a small café in Retiro. One night I was traveling to Tandil, recommended by a teacher we both knew. Since then, I have walked hand in hand with this theatrical career project that started as an adventure,” he said. On behalf of the College of Art, Claudia Castro, Vice Dean, presented a plaque. Elita, enthusiastic, affectionately thanked colleagues, friends and students.

Before the confession, the newly deceased teacher, Marta Sanchez, was honored. Daniela Ferrari and Cecilia Gramago read excerpts from their authorship.

“Back to live in theatrical space”

Anabela Tvihaug, Secretary of Extension at the College of Art, recalled the day: “We believe the greatest emotion has been to inhabit a space of the university – like CCU – after the context of the pandemic that has forced us to rediscover ourselves and rethink all our work from the cultural sector. To return to live in an institutional space with this Party, to hold a theater party with the education of artists (such as those who make up the Orson Peralta Company, directed by Julia Lavatelli) also active in the art field is indeed an immense joy.We celebrated our teachers, researchers, grassroots workers and promoters of great events and activities.We enjoyed our student artists in group A variety of theater company represented the territory at the National Theater Festival as TOC and with constant accompaniment of non-teachers and college technicians. It was a great day for all the community,” concluded Tvihaug.

The Espacio Teatro has been promoted by the College of Art, through its Extension Secretariat in connection with the Department of Theater, La Fábrica Theater Room and Student Centre. CULTURE UNICEN, ATUNCPBA and FATUN accompanied Culture, the Directorate’s Extension Secretariat and the Emergency Committee cooperated.