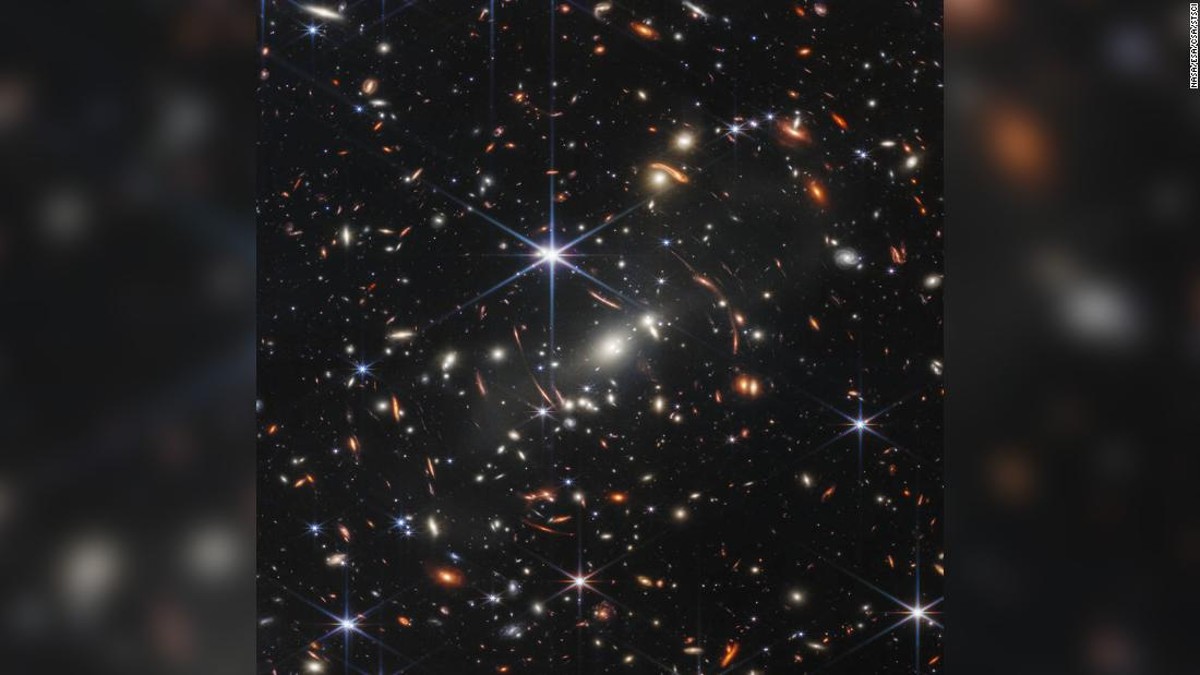 (CNN) — There are already first glimpses of how the James Webb Space Telescope will change the way people see the universe. US President Joe Biden released the first photo from the telescope on Monday during a preview event with NASA Administrator Bill Nelson at the White House.

Image SMACS 0723 shows a galaxy cluster that acts as a magnifying glass for objects behind it. Called gravitational lensing, it produced the telescope’s first deep-field view of thousands of galaxies, including incredibly old and distant faint galaxies.

“This part of the vast universe covers an area of ​​the sky about the size of a grain of sand within arm’s reach of someone on the ground,” says a NASA report.

According to Nelson, “This is the deepest picture of our universe ever taken”.

The remaining high-resolution color images will debut as scheduled on Tuesday, July 12.

The space observatory, launched in December, will be able to peer into the atmospheres of exoplanets and see some of the first galaxies formed after the universe began in infrared light, invisible to the human eye.

The release of the first image highlights the scientific capabilities of the James Webb Telescope and its ability to produce spectacular images of its massive gold mirrors and scientific instruments.

Several events are taking place during Tuesday’s image launch, all of which will be streamed live on NASA’s website.

Opening remarks by NASA leadership and the James Webb Telescope team will begin Tuesday at 9:45 a.m. ET, followed by the image release broadcast at 10:30 a.m. ET. The images will be revealed one by one, and a press conference at 12:30 PM ET will provide more details.

NASA shared the first cosmic targets from the James Webb Telescope on Friday, a preview of what will be Tuesday’s image release: the Carina Nebula, WASP-96b, the Southern Ring Nebula and Stephen’s Quintet.

Located 7,600 light-years away, the Carina Nebula is a stellar nursery where stars are born. It is one of the largest and brightest nebulae in the sky and contains many stars much larger than our Sun.

The James Webb Telescope’s study of the gas giant planet WASP-96b will be the first full-color spectrum of an exoplanet. The spectrum will include different wavelengths of light, revealing new information about the planet, such as whether it has an atmosphere. Discovered in 2014, WASP-96b is located 1,150 light-years from Earth. It is half the mass of Jupiter and completes an orbit around its star every 3.4 days.

This test image was taken by the Webb Fine Guidance Sensor over eight days in early May. It shows how Webb can capture detailed images of very faint objects.

Also known as the “Eight Bursts,” the Southern Ring Nebula is 2,000 light-years from Earth. This large planetary nebula consists of an expanding cloud of gas surrounding a dying star.

A space telescope view of Stephen’s quintet will reveal how galaxies interact with each other. First discovered in 1787, this small galaxy is 290 million light-years away in the Pegasus constellation. According to a NASA report, four of the five galaxies in the group are “locked in the cosmic dance of repeated close encounters”.

The targets were selected by an international team consisting of members from NASA, the European Space Agency, the Canadian Space Agency and the Space Telescope Science Institute in Baltimore.

Looking to the future

This will be the first of many images from Webb, the most powerful telescope ever launched into space. According to NASA Deputy Administrator Pam Melroy, the mission, originally expected to last 10 years, has enough excess fuel capacity to operate for 20 years.

“After the Big Bang, by searching for distant galaxies, light has taken billions of years to reach us from those galaxies,” said Jonathan Gardner, the project’s deputy principal scientist. Webb at NASA during a recent press conference. “The Web is bigger than Hubble, so it can see fainter galaxies that are far away.”

The telescope’s initial goal is to look at the universe’s first stars and galaxies, essentially seeing “the universe turn on the lights for the first time,” said Eric Smith, Webb program scientist and chief scientist of NASA’s Astrophysics Division.

Smith has worked on the James Webb Telescope since the project began in the mid-1990s.

“The James Webb Space Telescope will give us powerful new eyes to study our universe.” Smith wrote in an update on NASA’s website. “The world will be new again.”